Where did that week go?

For me it was quite a good week; seven piano pupils cancelled their lessons - I sympathise as most of them were away because they were unwell, but it meant I had three-and-a-half hours unexpected time off, in thirty-minute chunks. That made a huge difference to how I felt on Wednesday and Thursday evenings - as in 'pretty chipper' rather than 'zombified'. Food for thought when it comes to next year's schedule? But that is more than six months away in a whole future lifetime.

I'm following another www.futurelearn.com course; this time 'How to Read a Novel'. There's more to reading than just turning the pages, tha'knows. Last week's module all about dialogue, using a well-regarded tour-de-force as the text, which I found to be fairly unappealing. Luckily they shared the extracts that they wanted us to discuss, so I haven't had to read the whole book ('First Love', by Gwendoline Riley). Which is fortunate, as I have neither time nor inclination. There are other books I would like to read;

Ulysses by James Joyce - yes, really, it looks to be fascinating, and it is recommended that you obtain a map of Dublin before embarking upon the book.
A Room of One's Own - Virginia Woolf
Cousin Phyllis - Elizabeth Gaskell

and other books that I'm in the middle of;

The Portrait of Dorian Gray - Oscar Wilde
Genesis - for the Bible Book Club. I've been listening to the audio version read by David Suchet.
I have been bought special 'sleephones' 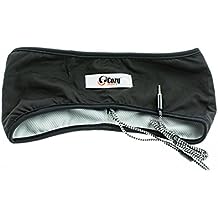 to replace the knitted headphones that I have had for years, and that have given up working. They are much more comfortable. The opening chapter of Genesis (the creation) is so beautifully written and read that I don't really want to spoil it by going on to the next bit. In fact I fell asleep, woke up when Noah got off the Ark, and woke again when the story had reached Lot and his wife. This doesn't seem to be a good way of going about things.
Holding - Graham Norton - for the other Book Club. Luckily I read 'Holding' last year, and can remember a lot of it, so I've just dipped in to remind myself how it goes.

Anyway, getting back to last week - however it started, it finished with a flourish;

On Friday we took my father, or he took us, depends on how you look at it; we went in our car anyway back to The Perch in Lancing. I had Moules - they came in a giant pot like this, 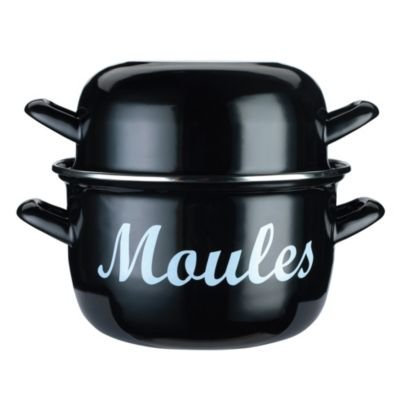 (only stainless steel and not labelled 'moules'), a whole kilo of them. I did manage to eat my way through about two-thirds, unlike my father who consumed them all. It's not as totally greedy as it sounds; a kilo has around 20-25 mussels, and roughly 250g of  shellfish.

None of us ate anything further that day.

On Saturday the offspring helped us eat a joint of lamb that had been bought for Christmas, but went into the freezer instead. It. Was. Delicious. Worth every penny of the ridiculous expense. (BB and I had decided that it was part of our Christmas Present to each other.)

On Sunday we used up some 2-for-1 tokens at Pizza Express (thank you, no 1 son) at lunchtime.

Now it is Monday again. A toasted sandwich and baked beans for lunch seemed a more than adequately sufficient meal in the light of the previous three days.

Today looks like being a gentler day than it might have been - two pupils are unwell and one has a school rehearsal. So that's another hour-and-a-half off (in thirty minute chunks) which is how I have managed to put up a blog post!

Just three pupils left for this afternoon, and two this evening. A total of seven, instead of the usual ten!