I've been looking forward to this Friday for  while - it's been nearly a fortnight since my last 'silent' day. As in 'all-by-myself' day. I need these from time to time to stay sane, or at least what counts as sane in my case.

So here I am; himself is out, and I am set up with tablet, fleecy blanket, cat, coffee, Kindle, snacks, writing book and pen, flask... 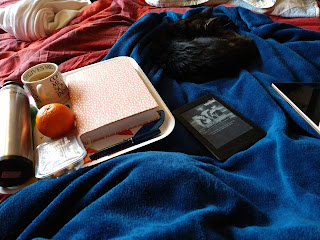 I have got as far as breakfast (in bed) bath (in the bath) and putting clothes on (me).

A surprisingly wonderful Christmas Present has been this amyrillis; 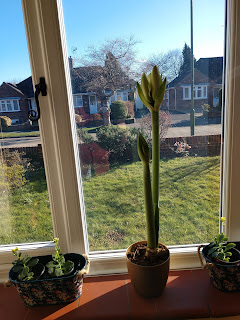 This photo was taken three days ago, and I only planted the bulb at the beginning of January. Today it has four huge, white blooms. You will have to wait until I go downstairs for a picture. I am not disturbing the cat Again.
So much energy and vitality concealed in such an unpromising bulb! Which reminds me, I need to check on those poor little iris bulb, which, according to the instructions, have to be shut away in a dark cupboard for TEN WEEKS after being planted. Last time I looked they were inches tall, all pale and loitering among the spare china and tablecloths.

When I look out of the rather high window of the little music room I use on Mondays and Tuesdays, I can see a great expanse of sky, and the tops of a couple of oak trees. These are always full of starlings. At a first glance I don't spot them, but one or two will move, and suddenly the tree is alive with a score of black shapes shifting from twig to twig. Watching beguiles the minutes between pupils, or even moments when I need to 'count to ten' before responding to some playing (or behaviour) which needs a measured and effective approach to achieve  a positive result.
'What are you looking at?' asked a provoking boy.
'The birds in the tree over there.' (is honesty always the best policy?)
'Why?'
'Because you are messing about and not listening to a word I say so I would rsthee watch the birds.' (Let's test this policy)
He was totally silenced (for a moment).
'Shall we have another go at those notes now?'

On Wednesdays I drive under a rookery. I was very concerned that the rooks were all checking out the nests a few weeks ago... too soon, too soon! They must have heard my thoughts as they were absent for a while. This week they were back as I drove to school at 9am; each nest had a black rook sitting beside it. When I returned along the same road several hours later they had all gone. Where?

On Thursday the week before last, driving along another road (did I write about this before?) I passed several trees each with about a dozen pigeons hunched among the bare branches. They were still there on my return. I've just remembered that a couple of years ago at about this time of year they were all crammed (not as many of them) into a small birch tree in the middle of a nearby roundabout. Odd. 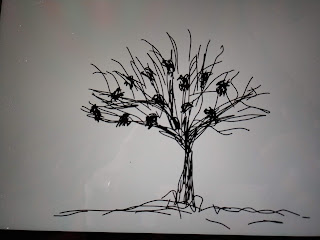 It is remarkably difficult to draw small birds sitting in a tree on the tablet using just mt finger, but the stylus is downstairs. It is even harder to persuade the picture into the blog; in the end I took a photograph of the drawing using my phone.