My grandmother, called Oma (as opposed to my mother, called Oma by my children - pay attention now), My Oma trained as a doctor around the time just after the 1st World War. She would have been appalled, back then, having lost BOTH her younger brothers in the fighting, to hear it called the 1st World War. Back then it was known as the Great War, never to be repeated.

But as usual, I'm heading down a different path... what am I on about? Oh yes, Barometric Pressure. 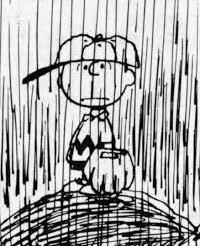 On Sunday I was suddenly enveloped in a black cloud, a fog of gloom and despair. I was supposed to be playing the organ at church, but when I got there I couldn't see or speak for unexpected tearfullness, so just handed the music to the other organist, turned round and came home.

What was all that about?

It's hard to know what was the trigger, or even the final straw.

Too many 'incoming' events, demands, requests? Maybe.
A couple of wakeful nights? Possibly.
An upcoming school assembly weighing on my mind?

And, almost certainly, the aftermath of a routine clinic appointment earlier in  the week. ('No change, although the distance you walked was considerably less than usual', any reason for that?' 'Yes, I'm feeling tired having just yomped up the hill to thw hospital.' ' Oh, well, that explains it'.)

I am usually cheered up by a clinic visit - the 'no change' keeps me very happy, but not this time.

Barometric pressure, Oma would have said, nodding slowly and blinking at you though her thick lenses like an ancient owl. The weather was pretty appalling on Sunday, storm Freya and whatnot. Anyway, I came home and had a day of tv and knitting and reading and doing precious little, and the next day felt less fragile. On Tuesday I woke up feeling 'normal'. Howzat!

The usual me is mostly cheerful, mostly pragmatic, mostly happy, sometimes joyous, even. It's always a bit of a surprise to find oneself inside one's own personal thundercloud. But with family and friends all around (and sunshine and chocolate, don't forget the chocolate) normal self can usually be resumed fairly swiftly.

Meanwhile, I have finished one book, started another, and added many many many more rows to the various bits of knitting I am engaged upon.

It's Friday today, and I've been fine all week. Whatever it was that descended upon me last weekend seems to be gone.

I'm having to tap this post out on my tablet, as Leo has taken up residence in the computer chair. 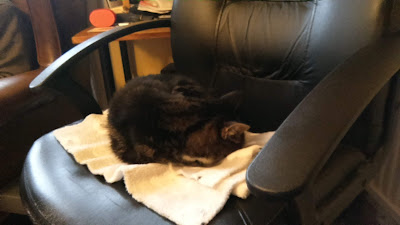 We've provided her with a suitable box 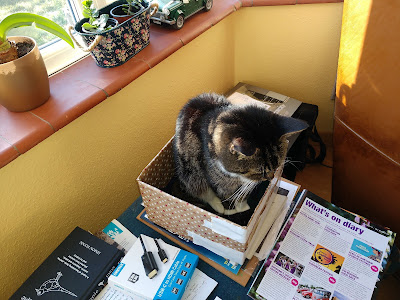