Coffee morning day. It happened. It went ok. They ate all my little cakes and as much of the apple pie that was put out. There was totally an over-supply of cake and biscuits, and maybe one of the most popular items on offer was the tray of fresh fruit for non-cake-eaters.

Afterwards Himself and I set off, off and away... and ended up south. Trundling along the main road I said 'there, there' and we turned the Panda up a short, steep and rutted cart track, parked it to one side halfway into a hedge, and went to investigate St Mary the Virgin, Upwaltham; a church that I've often wanted to visit. 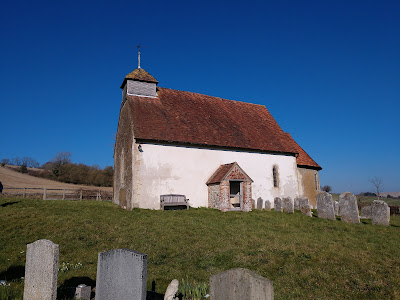 There it sits, with fields behind, a graveyard in front, and the road below. In spite of the traffic noise, and a tractor harrowing the field, there was a sense of peace.or silence. It is a late Saxon church, serving the few houses and farms dotted about, with a Norman apse added at the East end. A couple of kites were making slow circuits above, in the cloudless blue sky. 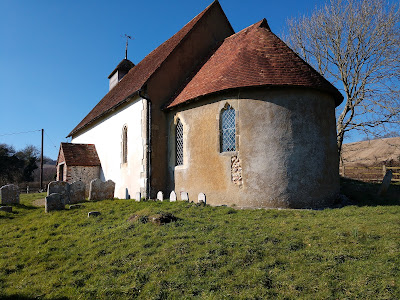 This modern window was added for the millenium; maybe you can make out the Lamb of God in the top section, and the swallows flitting across the lower panes. 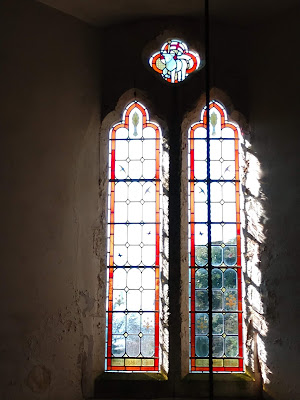 That Norman apse - oh dear. Some kind of major works are underway - I guess it is slowing detaching itself from the main building and sliding down the hill... 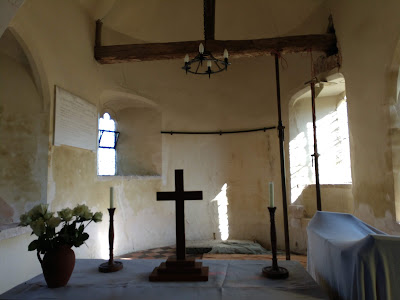 We continued on our way reaching the village of West Dean via a circuitous route, and found food at the Village stores and cafe. It was warm enough to sit outside and watch the rooks busy in their small rookery, flying in formation around the field - can just about make out the nests. 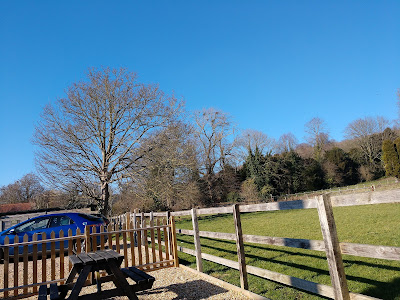 We were joined by a very beautiful and very persistant cat who tried to persuade us to part with our bacon croissant, or toasted brie sandwich, or maybe the milk for my tea. 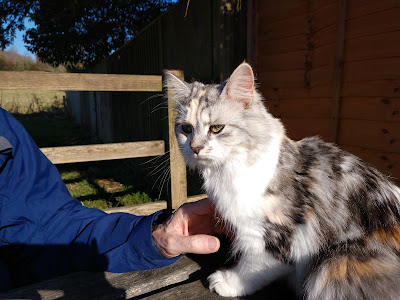 Finding us impervious to all blandishments it abandoned us for a slow prowl around the border of the field - the soundtrack for the cat in Peter and the Wolf came immediately to mind - the cat's movements were an exact fit to the rhythm.
Posted by KirstenM at 19:53:00