Friday 22nd was a baking day - I set to and made another Slovenian Apple Cake, and then the associated mini buns. Forty-eight in all.

The buns are associated with the Apple Cake because of the left-over bits and pieces; The Apple Cake uses most of a small carton of sour cream, and two egg yolks, to make the pastry-like cake bit. There is no way I am going to make meringues by hand, so I googled and came up with this site;

which brilliantly lists recipes according to how much egg white they need!

And here I found a recipe that uses two egg whites and some sour cream (or yoghurt). Done deal. Especially as you don't have to whip the egg whites.

That took up the whole of the morning - Himself was taking a neighbour to the 'local' (forty-minutes away) hospital for various appointments, and didn't get back until gone 2pm. He found me sitting in the garden with a cup of tea, 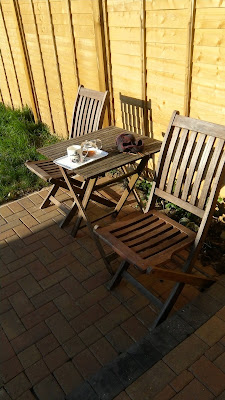 highly amused watching one of the cats, McCavity. She had just spent an uncomfortable couple of minutes trying to find a way to settle on top of one of the Balinese statues

She had clearly thought that its head would make a good perch from which to enjoy the sun and watch the world. I wish I had been able to take a picture of Hanuman wearing McCavity like a Russian fur hat. Sort of like Sophia Loren...