Since the last post, James-the-gardener has been and removed 'about 2 tonnes' of weeds and earth from the border, and replaced it with 'about a tonne' of topsoil and compost. 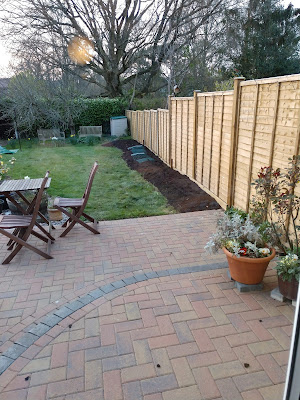 The bits of plastic that are on the earth are to annoy the foxes, who came and played on the surface, leaving footprints all along the border, and scattering the soil all over the edge of the grass.

The chairs and table are moved forward because he was very keen to show us how good a raised bed would be against the fence there, to deal with a strip of weeds and grubbly stuff. He has managed to convince us - I won't be giving up teaching any time soon... 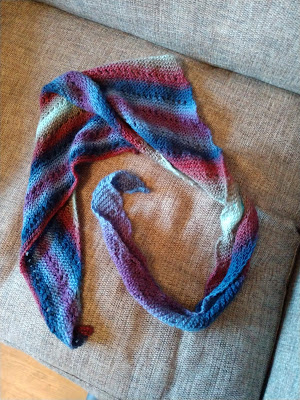 and  does a very good job of excluding the draughts that chill the back of my neck. I've got two new projects on the go, to help me stay away from endlessly playing freecell. This going to be a square blanket 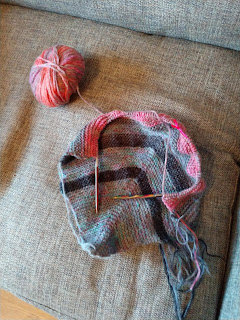 What you and see is just one corner. The plan is to keep knitting and knitting, but you increase by one stitch in the middle of the row each time, so that the knitting forms itself into a 'mitred square', and you just keep going until you run out of wool. I've used about half a ball of the murky blue so far, with a couple of stripes of leftover grey, and now started on the reddish pink ball. I bought the blue and reddish pink wool on a holiday in Tewkesbury way back in -  ah yes February 2014 - as a kind of souvenir.

I keep this picture of a dragon over the piano as a reminder of those days; I'm inordinately pleased with how it came out. 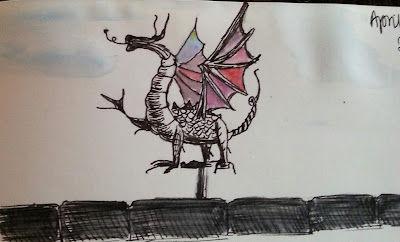 This tangle of wool and needles is a large-scale project; the plan is that it will become a cardigan, knitted entirely in one piece, only needing the side seams and sleeve seams sewing together. It will stop being a 'portable project' very quickly. 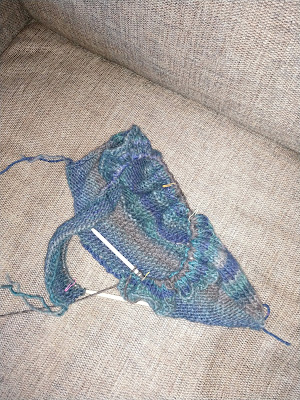 Here's a picture from then pattern sheet; I've finished the left-hand sleeve and that long thin straggle is the beginning of the front-over-the-shoulder-down-the-back. At the moment it takes me nearly ten minutes to knit a row... slow going. 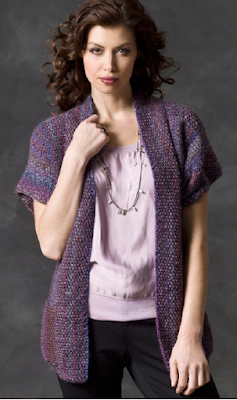