Today dawned bright and sunny. I turned over and went back to sleep...

but not for too long. But for nearly too long - by the time we were out and about at ten, the sunny weather was more like 'changeable' and 'chilly'.

First stop - pick up my father, who was joining us on the jaunt, and then off to Wiggonholt. I've wanted to look inside for quite a while, but it was locked last time we called by. Today it was open (and very, very cold inside!)


It looks exactly like this, if you put more grey into the sky and more green onto the trees. I didn't take any photographs, but if you go here you will see pictures of the interior, with the large oil lamps suspended from the ceiling - no electricity here! I did play the harmonium - you would need a lot of stamina to keep pedalling and playing for a really long hymn.

Then on to St Botolph's, Hardham, where we have been a couple of times before. The building is still pretty much as the Saxons left it;

And lookee, lookee - these are some of the best wall paintings anywhere... here's wikipedia...

St Botolph's Church is the Church of England parish church of Hardham, West Sussex. It is in Horsham District and is a Grade I listed building. It contains the earliest nearly complete series of wall paintings in England.[1] Among forty individual subjects is the earliest known representation of St. George in England.[2] Dating from the 12th century, they were hidden from view until uncovered in 1866 and now "provide a rare and memorable impression of a medieval painted interior".[3] The simple two-cell stone building, with its original medieval whitewashed exterior, has seen little alteration and also has an ancient bell. 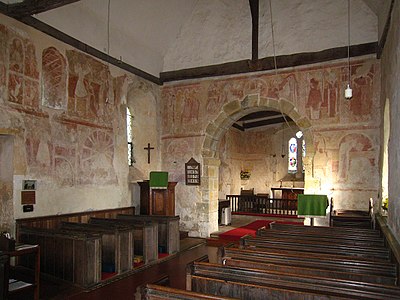 Last time we came they had a very wheezy harmonium; this time round there is a portable stand for an electric keyboard. Plus ca change etc.

Once you have let your eyes adjust, and got used to what you are looking at, the images become clearer. The wikipedia site is as good as any to see more of the pictures and read up the history.

It is astonishing to think of so many of the churches having these comprehensive wall paintings, and the parishioners being enveloped in these pictures. We are so used to bare walls, white paint...

Final stop - Stopham, appropriately! But not the church. We were now frozen to the marrow. Medieval folk must have been hardier, and gone about in layers and layers of clothes.

No, we headed for The White Hart and coffee (or gin-and-tonic) and, eventually, fish and chips. (Thank you very much indeed for the treat!) I whiled away the waiting time with paints.

And afterwards we meandered across the ancient bridge

watching some people drift upstream with the tide, and then get to work to paddle homewards. There is plenty of history and interest associated with this old bridge, which was still being used up until its replacement in 1986 by a broad modern construction just upstream.

Home. Some of us will have had a little snooze, some to chill out on the computer, or by reading, and I finished sewing up my Bamboozle jumper! Hurrah! 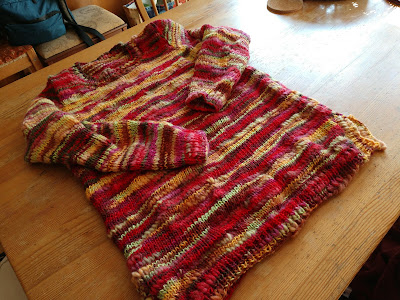