I feel as if I've been inside my own little foggy cloud today... most of today... I did get to church because I was on duty and because I'd promised a lift to someone, but as soon as I got there I had my doubts. Surely handing our hymnbooks and saying a cheery hello wasn't too difficult? Sure, that was fine.

I'm glad a certain member of the stewarding team wasn't there as the rest of the morning didn't go so brightly. I think the visiting vicar was off-colour too - he missed out the communion prayer and nearly invited us all to receive before doing the consecration bit, but realised, and back-tracked through the service just in time (visitor beside me was as confused as me, but we got to the right page in the end).

Anyway, I didn't hang around long afterwards, took my friend to her house, braved The Fast and Furious Roundabout, came home and went to bed. What's wrong with me? I dunno - probably just the last three months. I've spent the afternoon dozing, and crochet, and reading, and pottering about and am feeling sleepy but less 'aware of my innards', if you know what I mean.

The cats aren't eating - the vet and the vaccinations have put them properly out of sorts too. The last couple of plates of food have only been nibbled and licked and pushed around. So we gave in - 'Sheba' (half the amount in the pouch for twice the price' was on offer, and we set out a saucer each.
Result. 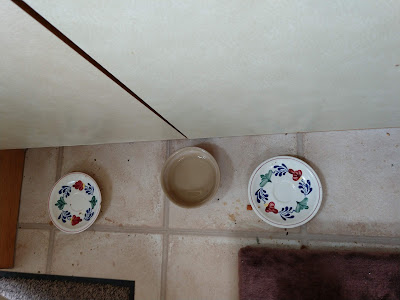 But they needn't think that's going to be the new diet from now on - we've ALL got to be able to eat in this household, not just the cats.


I've had to find another footstool because McCavity been melded to mine all afternoon. 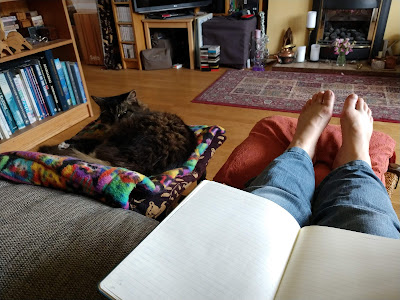 I've finished the green granny square (I think the colourway is called 'Verdi' - for the composer as well as the colour. Thinking about that, calling it 'Green's Requiem' just doesn't have the same dramatic ring, somehow) 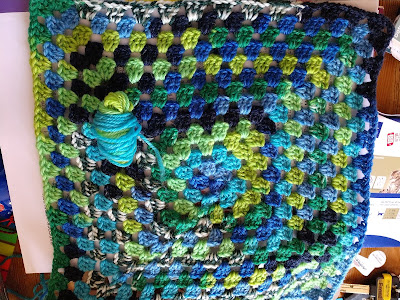 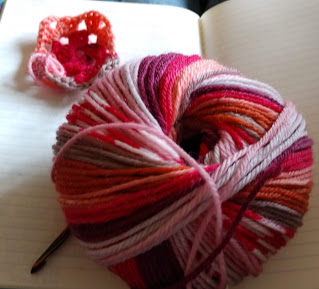 When I finally sew them all together I think I'll not put these two next to each other.

Himself has put down same 'ordinary' cat food. I say ordinary - it is the most expensive of the ordinary cat foods - and there has been complicated manoeuverings  as to which cat eats from which saucer. It is getting fairly impossible to ensure that McCavity is the one that actually receives the medicine for arthritic hips rather than Leo.

Well, energy levels exhausted again - just enough to make a cup of tea and take another doze. Normal service may possibly resumed tomorrow (three pupils in the morning, four in the afternoon, three after school - an average sort of day...)
Posted by KirstenM at 17:12:00