This week has ended (already?) on a reasonable high.

Yeah, I know, it's only Thursday. But I'm not teaching tomorrow (grand family celebrations all day), so as far as I am concerned the teaching week, which begins on a Saturday, has ended a day early.

Quite a few of the lessons went much better than I expected, and only a very few went worse than expected. (There are always a couple of tricky pupils, who, for one reason or another, are difficult to teach).

I have become adept at getting the painkiller medicine into McCavity. I studied a youtube video, and more or less replicated the action;


This has been reasonably successful five times in a row; she must know what is coming, but it seems that the cat treats are worth the disgruntling.

The other night it was only a partial success, but that was my fault. I got the actions slightly out of sequence and started pushing the plunger on the syringe before I had got it properly into her mouth. Messy. I reckon she got at least half, though, and most of the mess fell on the cat treats, which, after some consideration, she decided to finish up anyway. 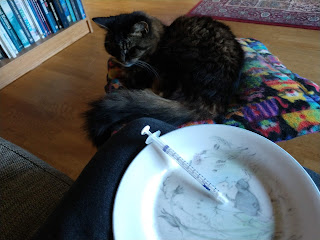 The plate is empty, because the deed has been accomplished. You can see she's not really bothered by the whole procedure.

I've done a bit in the garden - mostly picking (and eating) strawberries, and sorting out one of the big tubs of plants, evicting all the random daffodil bulbs I stuffed into it last year, and replacing them with random patio roses that I haven't quite killed through neglect.

This is last night's 'practising for the holiday sketchbook' effort. The large brown reptile lurking bottom right is actually a stone-and-iron-railing wall at the edge of the viewpoint looking over the ravine. And the brown train crossing the bridge is really the houses at the top of the hill on the other side of the ravine. I was copying a photograph of Knaresborough from last Summer. 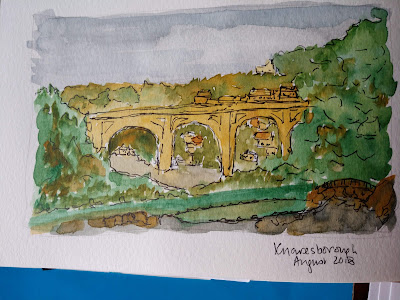 How hard is it to draw ears of corn? Not hard at all, it seems. 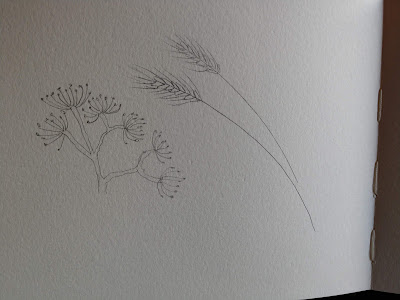 The random twiggy seed-head thing on the left reminds me; this morning I saw a Giant Hogweed growing in the verge of the lane I was driving along. They always cheer me up, looking like some alien triffid. If you look them up, you discover that they are an invasive species (see, aliens!) which can cause serious skin burns if you touch them (see - triffids!) so I suppose I shouldn't be so happy to see them...
Posted by KirstenM at 20:48:00