The first week of the Summer holidays is nearly over.

It is slightly horrifying how quickly the time disappeared... although a lot was packed into it.

Checking through the photographs on my phone is one way of finding out what happened - that only works if I actually take any, of course.

James has come and built the raised flower bed, and filled it with earth, but will plant it up later in August. It has been a very protracted project. To be fair, we do have other projects that have been going for even longer - the bathroom and loo springs to mind. Part of the problem with finishing off the loo is that the bare plaster is actually quite an attractive colour - a sort of gently variegated terracotta. The other problem is that neither of us want to do it.

I've picked up an entire tub full of apples that have dropped from our over-burdened tree. That was on Wednesday. We've been having a heatwave, 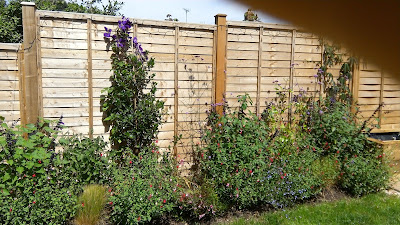 but under the apple tree was darkly shaded and relatively cool. 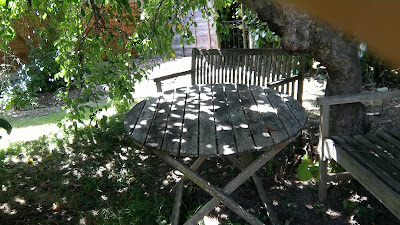 I'm going to have to learn not to put my fingers too close to the lens when I take pictures with the phone.

Sorry, I've been diverted from writing this post by being shown a news item that our new Home Secretary, also works as a consultant for a company that provides products and services to the Government, earning £1,000 an hour. Quick calculation - I could live for a year on just two week's work at that rate of pay, live comfortably on a month's work, go some way towards solving homelessness by donating six month's earnings... I try and keep politics out of this blog but at the moment it is very hard not to be thinking that we are all off somewhere very hot in a handcart in this country. It is not helped by our Church Book Club's book of the month being Proverbs. It is tempting to send a copy of chapter 13 to every politician and civil servant in the country.

There was a twitter row on my timeline the other day after the Archbish of Canterbury called upon us to pray for our leaders. Many responders would rather see them all go straight to hell; well, whatever our personal feelings, as Christians we are instructed to pray for our leaders whoever they are. The time has come, however, when I am wondering if just sitting here and 'liking' various tweets, or shouting at the radio and television - well, not actually shouting, but getting cross with the various interviewees, is a sufficient response to the current shambles. 'All that it takes for evil to exist is for good men to stand by and do nothing.' That's a call to action if ever there was. But how to act?

Yesterday we went to Wakehurst Place. We didn't get to see more than the cafe at the entrance, as we were taking my father to meet up with some Australian family connections who were over on holiday. He had a complicated plan involving this lunch meeting, followed by up to London for a meal with another friend... his complicated and split-second plan (normal for him) would be made considerably easier and more likely to be achievable if we acted as a taxi service. Our reward was to meet and spend a great couple of hours with people we would never have met otherwise. Our departure was delayed when I discovered that the husband had bought a harpsichord - yes, A HARPSICHORD - when he retired in order to fix it up and get it working, and then learn how to play it - that would have been good for another hour's conversation but we had to leave to get my father to the station...

I would be so tempted to take up their invitation to visit them in Australia... and not only for the harpsichord!

Today it has clouded over and rained - oh, you probably can't tell that it is still only 7.40 am. I woke at 5, and read my kindle for a while - it has a back light so I can read without turning the light on and waking himself. The clouds and cooler weather are a blessed relief.

It will be a full schedule - I need to try and track down a pair of shoes for my godmother - her feet have swelled up - heat? or worse? - and then meet up with colleagues for a Summer social. We have a Book Club BBQ to go to this evening, to discuss that book of Proverbs - we were asked to bring along a favourite. I think I may stick with

"Proverbs 15:1 A soft answer turneth away wrath; But a grievous word stirreth up anger.


Did I mention that I am reading an interlinear English-French Bible to try and brush up on my French? It has made reading Proverbs (very repetitive) much more interesting. 'But a hard word excites rage'.