It's arrived, at last. There are two more days left of term, Monday and Tuesday next week, but this afternoon I taught my last lesson until Saturday 7th September.

The holidays arrived in the nick of time - last night I was writing up my page-a-day diary and stopped, mid-word, after barely two lines as I discovered that I couldn't manipulate the pen or write a coherent word...

So, twelve days since my last post, in which time I have attended a school concert (two of my pupils playing piano solos), supported the remaining seven pupils taking piano exams - I withdrew two others beforehand as there was not a snowball's chance in hell they would be ready, lead a concert by the class that I have been teaching guitars to all year, and, today, sent in inventories and registers and my pay claim.

I've been given two bunches of flowers, 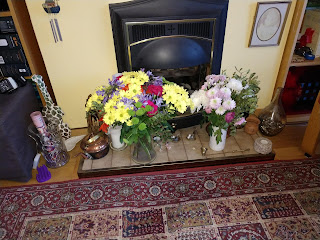 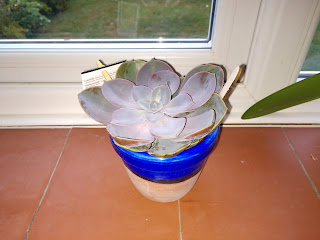 a bottle of wine (not drinked up yet), a little box of Guy Lian chocs, (eaten) an large box of malteaser chocs (also eaten), a voucher and some lovely, lovely thank you notes from pupils.

What else? Do you know, I would have to look it up in my page-a-day diary (which I brought up-to-date this morning) to have the faintest idea.

We've been (well, mostly himself) watering our border. It is a riot of colour, mostly purples, dark (clematis and salvia) and light (verbena), and reds (another salvia, I think). We saw some on a market stall and checked out the labels) 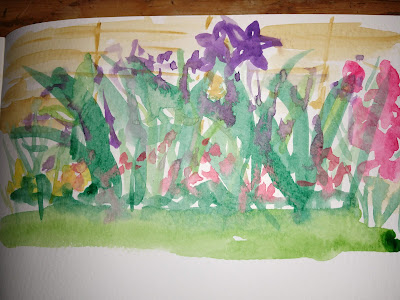 I dug over a weedy patch which has been annoying me for a month or so. I plan to throw a packet of poppy seeds at the bare earth and see what happens next year.

I had a go at 'paint a fantasy flower using wet in wet'; it looks rather a man-eater. 'Just load the brush with plenty of water, and plenty of pigment,' she said, 'and move it freely on the paper.. Add sweeps of different colours...'. So I did. 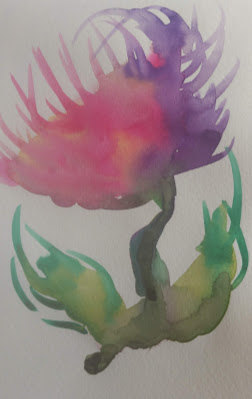 There was a trip to Chichester to collect some clothes we ordered from the internet. I 'accidentally' found myself in the art shop, and came out with a few insignificant little purchases; half pans of cadmium yellow, sap green and the wonderfully named quinacridone gold, oh what a beauty, what a superb colour;

Here are some more flowers 'painted from your heart, don't think about it too much,' after I bought the qunicridone gold: 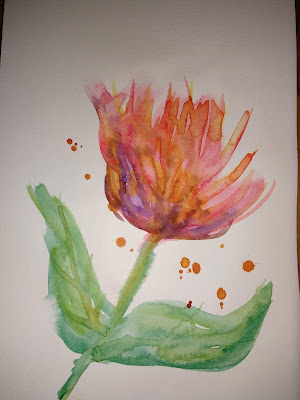 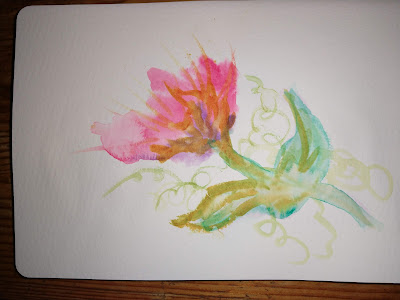 Not thinking about it too much totally suits my current state of mind... isn't that quinacridone gold lovely?

I've been giving a lot of thought to how to manage the art materials I want to take to France. With a bit of fiddling around I have managed to arrange things so that the colours I want are all in my smaller box (which I bought about 40 years ago when I first wanted to paint). 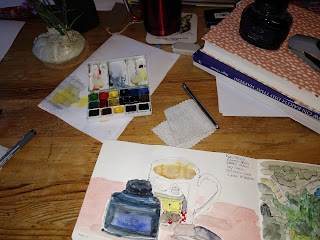