Tuesday 12th November - Before it all starts

It seems quite a good idea to blog first thing in the morning before anything happens - I'm in an optimistic frame of mind, and still have unused brain cells available for typing.

Weather - lovely again. Just as well, as there are things to do, people to see, places to go off and on through the day, and it is pleasanter being out and about, in and out, when it isn't raining.

I've had a go at capturing the idea of autumn colour in my much neglected diary - things change so often, so quickly, that they are over and done before they've been written in. If I do write them down, they will only get cancelled half an hour later. 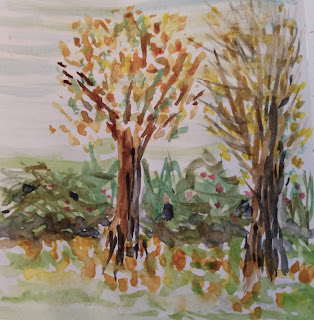 I've just splodged the colours on - careful examination of the tree as as we rush past in the car looks as though the remaining leaves are just splodged on, floating down to the grass any old how.

I called in to the garden centre to buy an orchid for my godmother's specialist nurse at the hospital; they were ferociously expensive so I will go back to M and S where I bought them previously. But I did find a load of exploding amarylisses (amarylissi?) which had burst through their cardboard packaging while they were supposed to be dormant.

I have bought three, unpacked them, and given them some water. We shall see. 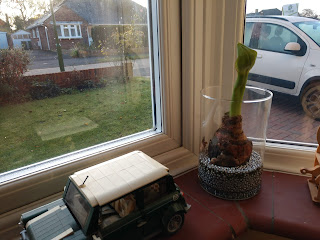 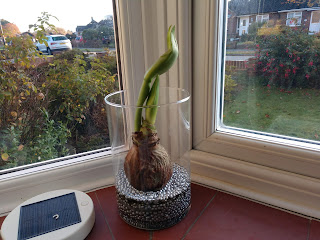 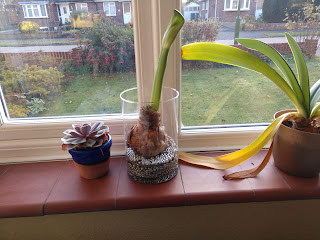 Email ThisBlogThis!Share to TwitterShare to FacebookShare to Pinterest
Labels: autumn colours, flowers, NaBloProMo, painting, too much to do, trees