Wednesday 6th November - everyone stand down...

I'm home again after a trip to see my Godmother.

We were lucky with the travelling - a misty Autumn day, full of colour, and the sun burning through quite soon.

Everything looks much better in the sunshine.

She's much better - although she didn't sleep much last night (neither did I). Something had upset her yesterday, and that was what had made her feel so unwell. We spent the morning there, sorting out various niggles, replenishing her fridge, chatting and so on. Some of the time was spent gently skirting round the future -  what if she doesn't want to be on her own any more? It was a bit like my dentist, who could do fillings without giving me an injection first; he would drill carefully around the sensitive spot, shifting the drill away before I had got as far as squeaking.

We have managed to bring forward her next clinic visit - the Nurse Specialist who looks after her is so lovely, so kind, so understanding. In the meantime we've got plenty to think about, and certain lines of thought have been opened, certain directions closed off, preferences expressed - you know the sort of thing.

I can crochet in the car (only when I am a passenger, obviously) and the length of the journey there and back means I can get quite a lot done. This is the current square. I started at the blue and white stripy bits on the right so that means I did nearly three and a half circuits. I just have to get from the bottom left corner to the top left corner and that means another square completed. 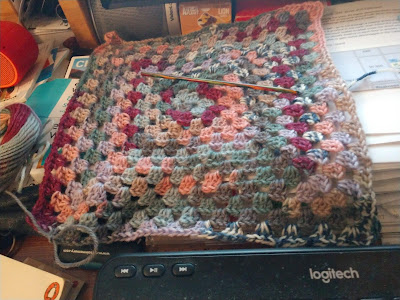 Didn't I promise you some more saints?

Leonard is the patron saint of prisoners. This is a succinct account of his life story, 'concocted in the 11th Century'.

William Temple isn't a saint; 'merely' an influential Archbishop of Canterbury, known for his work against the persecution of Jews, his theological contributions, and his ability to settle disputes among other talents. He is honoured on 6th November in the Anglican Communion.