actually, I'm pretty good at folding fitted sheets these days, even king-sized double sheets  - so long as the process works first time. Otherwise I might just tantrum. I teeny bit.

I've been a grownup for quite a lot of today, filling in forms to do with my Godmother's affairs, phoning solicitors for advice, discussing bank accounts, and even completing nearly all of my tax return when it is nowhere near 31st January!

A lot of chocolate is needed to keep going. Fortunately we have a whole big box of Marks and Spencer chocolate truffles which I had bought to take round as part of my contribution to a Book Club Meal, but left at home,turning up with just a couple of falafels and a dish of marinaded tomatoes. So that has left us with plenty of chocolate to add to the daily Advent calendar ration. 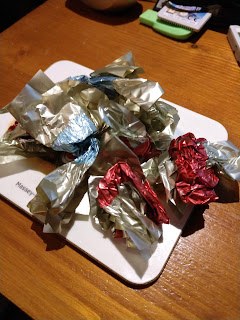 Not ALL the wrappers are mine...

I feel as though I have too many time-critical projects to complete and need to keep track of. I think this is roughly the order of importance now;

Funeral arrangements - we've set the date for early next year, but before then we need to arrange where to go for eatables afterwards, draft an order of service and choose photographs for said order of service. Actually, I've just sent the draft and photographs off by email.
We've also got to arrange payment, part in advance, part afterwards, which relies on telling her bank as this is the only thing they are prepared to release any funds for ...see below....

Probate forms - deadline - sooner rather than later - this means completing a great wadge of pages of questions to answer, and copies of important documents to gather. We'll take it all down to the registry office, rather than entrust original documents to the Mail at this time of year.
Bank Accounts - set up an account, fill it up with money, and then switch all the standing orders for payments regarding my Godmother's property, BEFORE informing her bank which has told us they will freeze her account once we tell them.

Tell my Godmother's bank about her decease - deadline - sooner rather than later - but after we think we have redirected all the payments.

This invoicing lark is always good for some confusion - from years of experience I know I am certain to attach the wrong invoice, or forget to attach an invoice, or send out a whole batch with typos and incorrect dates - I blame my artistic temperament (one 'super-spiritual' churchy friend informed me that he thought I had a Gift for administration - at that point he lost most of his credibility in my eyes)

Latin: O Clavis David, et sceptrum domus Israel; qui aperis, et nemo claudit; claudis, et nemo aperit: veni, et educ vinctum de domo carceris, sedentem in tenebris, et umbra mortis. English Translation: O Key of David and sceptre of the House of Israel; you open and no one can shut; you shut and no one can open: Come and lead the prisoners from the prison house, those who dwell in darkness and the shadow of death.

Email ThisBlogThis!Share to TwitterShare to FacebookShare to Pinterest
Labels: admin, Advent, chocolate, Churchy things, O Antiphons, to do lists, too much to do