Monday 6th January - ticking the tasks off the list

So, today we accomplished a number of various more or less urgent errands;

* Himself needed a hair cut - done

* Pay for the funeral - done. I'm acting as the 'celebrant', so, today I learned that I will have to be the one who presses the buttons to start and stop the music. It's enough to make me want to bring in my own mp3 player - at least I know how to work it...
I may bottle out of the curtain-closing button, unless it is a big clearly marked unmistakable effort. All the funerals I have been to have had someone lurking at the back just to work the sound system.
Oh well. It's a small, intimate occasion. I'm only expecting nine or ten people in total. We'll manage somehow between us, just so long as it doesn't turn into an episode of 'Some Mother's Do Have Them'.

* Take McCavity the cat to the vet - she had rather alarming symptoms yesterday concerning her back end, and what should and shouldn't be coming out of it. We got an appointment.
The first suggestion is that maybe she's got worms (so we've wormed her - that was easy as it is drops-on-the-back-of-neck rather than pill-down-the-throat-down-the-throat-down-the-throat; I've never met a cat that can't manage to spit said pill back out half an hour later)
The second suggestion is that it could be a reaction to her arthritis medicine. She's lost a bit of weight, and so may have been receiving a drop or two too much jallop which could make quite a different. So, no more medicine for now.

* Write the 'Eulogy' -done
well, sort of done. First question - what is a eulogy? Ask the internet...

eulogy /ˈjuːlədʒi/
Learn to pronounce
That's OK then - I've done about 850 words, but don't intend to say all of them.

* Liaise with other family members who are coming - there are only two, my Father, and my Brother. I've emailed the paperwork eg eulogy, and notes on asking which buttons to press to music and curtains to start and stop to my Brother, because if we are delayed, he's going to have to do it all! 'Ah, right, I see...' I don't think he's done this before either.

I'm not sure what all was on this.

Things like finishing off the 'Mindless Knitting for Christmas Time' shawl 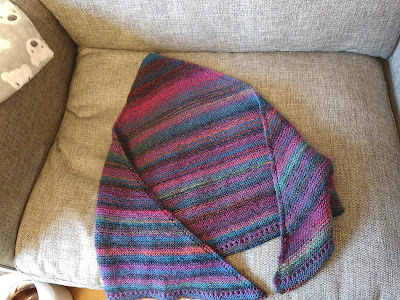 And buying cloves to finish the clove orange 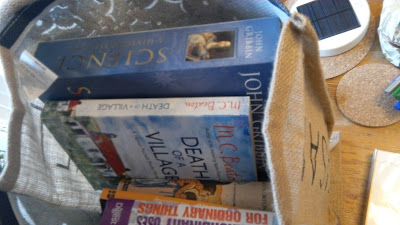 History of Science - mega-heavy paperback, why did we buy it, 20 years ago?,
The Bookshop by Penelope Lively - a good read, not sure if I'll re-read,
Death of a Village by M C Beaton - I enjoy her books, set in Plockton, mainly for the memory of the TV series,
Amazing Uses for Ordinary Things - 1001 uses for Bicarb, or vinegar, or candle wax, and so on and so on... boring,
In the Steps of St Paul by Morrow - I thought I'd want to re-read this, but haven't and now, 15 years later, I've changed my mind)

This is a win - five books out! 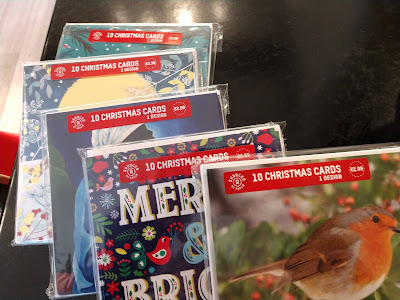 Finally, I cooked one of the recipes for January in my almanac - and it was very, very, good. Sausages, accompanied by lentils, cooked with onions and carrots and garlic pre-softened in butter, adding wine (I found the remains of some cider) and stock, and once they are cooked through, seasoning with lemon juice, salt and pepper. They were good. But then there are also carrots roasted with halved clementines, salt and pepper and fennel seeds... That was a supper to savour.
So far, so good.
Posted by KirstenM at 20:41:00

Email ThisBlogThis!Share to TwitterShare to FacebookShare to Pinterest
Labels: cats, decluttering, Getting things DONE, recipe, to do lists