I promised a photograph of my Spring wreath... 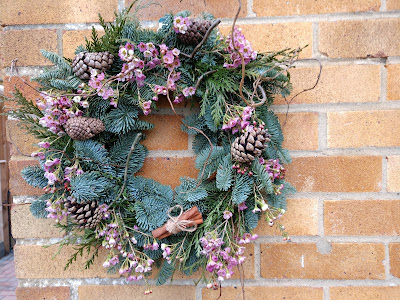 I saved the greenery, the fir cones and the little cinnamon decoration, and added the pink flowers and twisty sticks.

Leo-the-cat seems to have stopped being irritated by the bald patch on her head where the worm medicine was applied.

I have no idea if McCavity is better or worse - she behaves much as she always has - sleeps during the day, apart from waking to eat, and possibly goes out at night - I'm not staying up to find out. There is no evidence either way at her nether end, I'm glad to say.

Yesterday as I drove along the lanes to the rural school, I saw the rooks sitting beside their nests in both rookeries along the way; each untidy raggle-taggle of sticks had one or two rooks perched alongside, all in silhouette against the morning sky. The sun was blazing out of gaps in the clouds like a river of molten silver, so bright.

I am relieved to discover that today's task for 'The January Cure' was 'clearing out your pantry'. I did that before Christmas - hooray! Yesterday's was creating an 'outbox' - a receptacle for things on their out of the house. That was easy too - an old washing-up was available. I've put a book and a couple of pairs of sock in it. Job done.

It is half past nine at night, and I have been waiting since half past seven for it to be late enough to go to bed. Not long now...
Posted by KirstenM at 21:28:00