Tuesday was a routine checkup at the Royal Brompton Hospital chest clinic.

That meant an early - very, very early train. I was counting the houses where it looked as though someone might be awake as we drove through the streets at 5.30am. I reckon about eleven households...

There is a public piano in the station, painted to look all jungly; 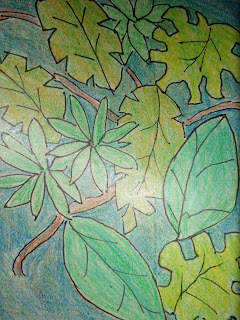 I did a quick sketch to get the main idea down, and then spent the train journey colouring it in. I suspect the piano has been damaged, as the lid was padlocked closed. I did play it last time we were there.

We arrived at Victoria station as dawn was breaking, pale and pink,

far too early for the first appointment, lung function tests, at nine thirty, but the very early train means that we get seats. Any later and we would like as not have to stand. Our reward is breakfast at le Pain Quotidien and then a leisurely stroll up Dovehouse Street.

Oh my word, but it was cold! Sunny and bright, but COLD.

the blood tests I have every six weeks to check if I am tolerating the various other medicines will now be done every 12 weeks,

after my next appointment they will probably see me annually instead of 6 monthly.

So that's all very positive.

We walked to the V and A museum for lunch and a look-around. There were a couple of exhibitions, and exhibits, that we thought we might go and see, but were distracted by all the things that caught our attention along the way;

the music room from Norfolk House, all white and gold, the parlour from a house in Henrietta Street, an interactive 'design your own chintz pattern' screen, which then emailed me a copy of my design; 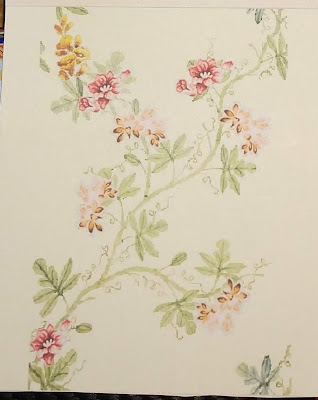 the Great Bed of Ware, and another HUGE state bed from somewhere else....

so, all too soon, it was time to catch the train home.