We seem to be moving into a rhythm...

I have a long lazy morning in bed, surrounded by books, drawing materials, browsing twitter, facebook, kindle, bbc news and various blogs on my tablet, while Himself is busy, doing - I don't know, really... I hear the washing machine going, and the dishwasher, sometimes the bread machine bleeps, sometimes there is silence...

Yesterday he took the car to the garage for its MOT, luckily not due until towards the end of next month. Halfway there he had a phone call (handless, or whatever it is called, hands-free, that's it) to say the garage was closing. So he turned round and came home.

That was good news for me; friends have passed on a small plastic 'greenhouse' which their daughter had when she was in student digs. And here it is, apart from two metal grills which are not in shot. 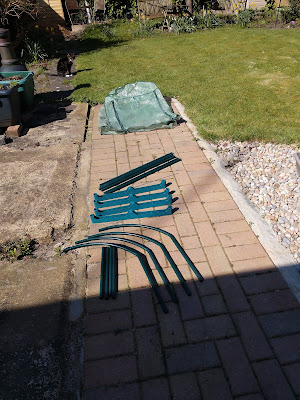 You might notice that there are no instructions... This always reminds me of the time when I was chuffed to bits to have found an affordable but reasonably demanding electronic chess set to give him one Christmas nearly forty years ago. That didn't have its instructions either... he was kind enough to say that fathoming out how to work it was as much of a delight as eventually being able to play chess. So I was pleased to be able to give him another challenge today.

I left him to the task and went to make soup; 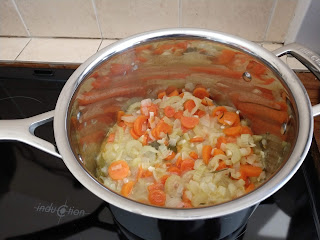 After a while the components had moved, and been combined. 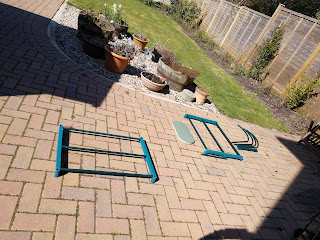 I went off and finished the soup, portioning it into pots for the freezer. (Sweat chopped onion, sliced up tired celery, diced elderly carrots in a mix of butter and chilli oil, with garlic and bay leaves Add enough water to cover and leave on low heat until carrots soft. Process and leave very thick - takes less room in the freezer and stock can always be added later.)

(Chilli oil - put a couple of dried chillis in a bottle with decent olive oil and leave for a couple of weeks. It's potent stuff, don't use too much!) 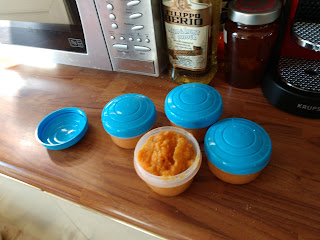 We have several dozen of this little one-portion pots left over from when I used to take vegetable puree, apple sauce, and rice pudding to my godmother every time we visited. I label things for the freezer by writing date/contents etc on a piece of masking tape and sticking it on the lid.

By the end of the day it looked like this - the greenhouse, not the soup; 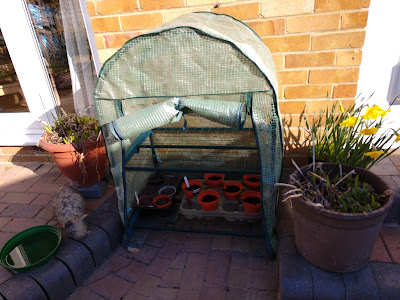 This picture was taken around 4pm - it will be in full sun soon. There are pots sown with lettuce seeds in there, but all my seeds are pretty ancient (sow before 2017, that sort of thing). We shall see, or not see, in due course. 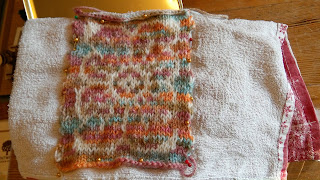 This is the first of the mystery knit-a-long patterns I'm attempting from the Arne and Carlos blog. I was quite pleased with it; I'd be happier if I had read the instructions properly before I started. It is supposed to be 13 cm by 14 cm. I've managed to persuade it to reshape from 11 cm by 16 cm to nearly 13 cm by a bit bigger than 14 cm. I was going to redo with  better attempt at following the instructions, but then I discovered there are FIVE patterns to knit every week! It's a fiddly business - their patterns only use two colours, and so does mine, but I deliberately bought yarn that changes colour all the time - mustakes ar so much les eesi two spotte.

In the end I've chosen a straightforward waltz, Dvorak of 54 number 1, the first on this youtube. The other waltzes are a bit hectic for me at the moment!

I'm also considering Les Anes by Grovlez  which a friend of mine at school used to play - I bought the music but had never properly learned it myself.