I've been watching large white butterflies twirling around in the garden, often in pairs, in a sort of free and aimless manner.

I've just nipped out into the garden to see if there were any in sight, but no, only bees; awkward little furry things to photograph, but anyway we all know what bees look like so focus and stuff like that doesn't matter. 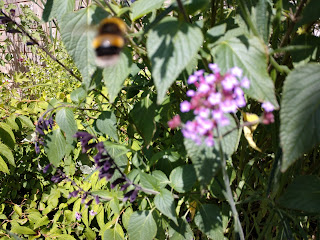 Just as I was about to give up, lookee lookee at what caught my eye; there, in the middle, 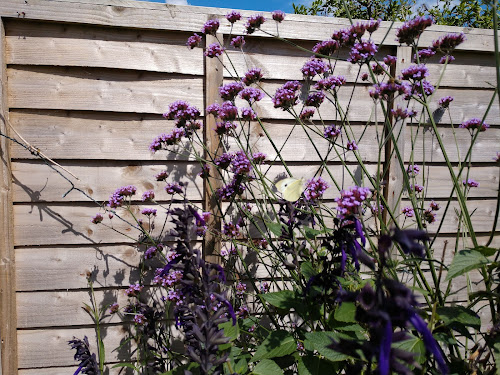 I guess this is the one that has been laying eggs under the leaves of plants in my veg patch.

Anyway, butterfly-like is how I am feeling - third day of the Summer holidays (and yes, I am counting; each day is precious. Teaching resumes on 14th September.)

I feel all sort of ready to go and be somewhere else and see something different. This time last year we were getting ready for our first ever cruise, working through the list of things to get done beforehand; currency, last minute errands, sorting out clothes, making lists... The photograph below is of one of the gravel paths leading up to Monet's house in Giverny; the lavender was humming with bees and a flutter with butterflies. 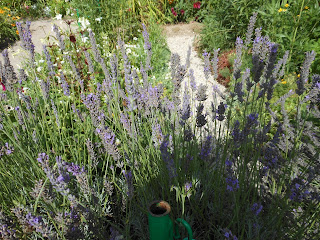 I am absolutely gutted at not having another cruise in my sights, especially before Brexit complicates everything (even the Brexiteers in the government seem to have stopped pretending that it will be 'a walk in the park' and 'as easy as an over-ready chicken' - presumably a non-chlorinated chicken?).

But, I suppose, in the grand scheme of things, we are fortunate. And anyway, we might have had a problem putting the cats into a cattery this year;

McCavity is learning to communicate, at long last, now that she is over 17 years old. It's not foolproof yet; when she wants to be groomed, she sits on the hearth rug and waits, and we are beginning to get the message. It is harder to respond to her 'my plate is empty' request; she goes and sits by the plate, but if no-one is in the kitchen then nothing is going to happen anytime soon.

Her latest communication is to come and sit close, but not settle, and occasionally give a little mew. Eventually a maliferous odour will make its presence felt... she wants her back end cleaning. After a couple of messy incidents, fortunately dealt with by giving her a dose of worming medicine and a mouthful of viscous gloop called 'defurrem', she has discovered that she can get us to do this unlovely task for her. I can't imagine that a cattery would take kindly to being asked to perform this routine... 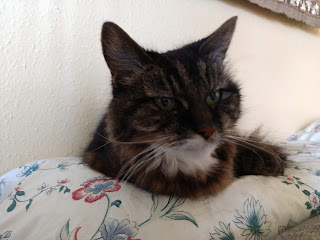 Here she is resting from our labours. All things considered, I would rather deal with her back end beforehand than start putting soft furnishings through the washing machine afterwards. Having babies is good training for dealing with elderly cats.

Did I mention vegetables earlier on?  What magic is this? Dwarf French beans from the garden; 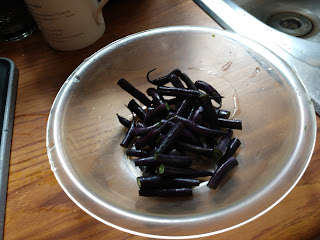 Cooked; 2 minutes in the microwave, in just a splash of water 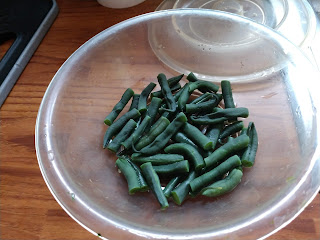 I prepped and cooked them within minutes of picking them; yes, yes, half past three is a strange time of day to be eating a bowl of green beans, let alone purple beans, but they looked so extraordinary, and I didn't totally believe the friend who said that they would turn green when cooked, so I had to try them.

They were d e l i c i o u s. These pictures are from a couple of days ago; the next batch were stored overnight in the fridge before cooking - nowhere near as good, but we repeated the quick-pick-prep-cook scenario yesterday and they were just wonderful again. There's a message in that somewhere.

I've spent this morning finishing off the facemasks from Saturday. The fiddly sewing in loose ends bit. A friend has given me some elastic, so they will be in the post tomorrow, I hope. I was pondering the relative merits of hand and machine sewing... one is slower, with no finishing off stage. The other is quicker, and then you are left with nearly a dozen thread to tie off and clip.

Ho Hum. This week I intend to be intentional; to do things 'on purpose', rather than let things just happen. It's 2.30pm on Monday and I'm doing well so far.