Oh yes, I am feeling very restless these days, while at the same time full of a dead-weight inertia which mostly prevents the restlessness from turning into anything active.

So he goes off for a brisk stroll around the block, come wind, come weather, while I stay inside and do... well, not a lot. It's half-term, I tell myself. I can be on holiday for a week.

We did get out twice this week; on Monday, or maybe it was Tuesday, certainly wasn't Wednesday - what day of the week is it anyway, and does it matter? Anyway, earlier this week we went out, ignoring the dark clouds building up in the direction we were headed which was a nature reserve called Ebernoe Common. Halfway there it was clear that the rain which had just started wasn't going to stop, so we changed our plans and headed home along a different route to avoid the roadworks we had just spent ten minutes hanging around in.

This meant we passed a Quaker Meeting House called The Blue Idol, which I have always wanted to visit. 'Turn right up ahead', I called out, and he did, with admirable caution as the right turn was on the point of a blind bend.

It was well worth the diversion. The rain eased as we parked in a space outside the building, and the small garden was open.

https://commons.wikimedia.org/wiki/File:Blue_Idol_Quaker_Meeting_House,_Coneyhurst,_West_Sussex_-_geograph.org.uk_-_1523865.jpg
The meeting room wasn't open, but we were free to wander round the garden - very informal, very peaceful, just the sound of birdsong and dripping leaves. It was very like this picture - if you go on their website you will be able to discover more about this lovely place.
Today we went out again, even though it was raining and grim outside. I had read about this curious abandoned church in woods near Petworth, above a hamlet called Bedham. I recommend you follow up the link - turns out that this tiny hamlet was a centre of artistic endeavour, including the place where Elgar wrote his cello concerto - who knew!
It rained all the time, but since the church is deep in the woods, it wasn't too wet. 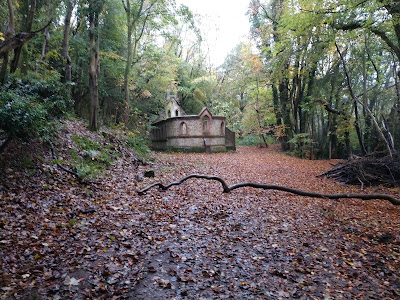 The church was built in the 1880s on a flat ledge of land just below the road, surrounded by trees. During the week it was used as a school for local children; on Friday afternoons they turned all the desks round to face the east ready for Sunday services. 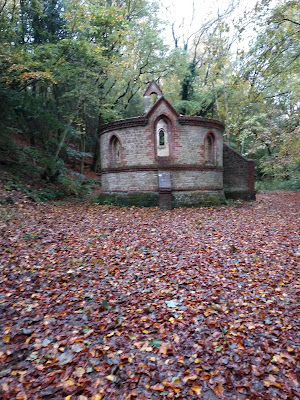 The beech leaves were everywhere, totally covering the ground, a wonderful bright copper colour. Apart from a despondent donkey, braying in the misty fields below the place was deserted - until a family with three young children and a wildly over-excited labrador came tumbling down the path and began traversing the muddy slopes above the church - at least the children and dog took to the woodlands, the adults were more - adult.

I've been driven crazy by having 'restless legs' this evening - it happens every so often and is extremely irritating. A glass of ginger wine, some gouda and black pepper biscuits, and typing up this blog seems to have effected a cure.

I'm typing too fast and making the keys rattle, so it is getting hard to listen to the gang on 'Have I Got News For You' - time to stop...