Thursday 28th January - Adventures in - this that and the other

Here's a thought; quite often, what they mean by 'mindfulness' is actually 'mindlessness'. Like doing colouring books, or, in my case, playing freecell on the computer. And quite a lot of my knitting projects are selected for their 'mindless' qualities. I did see an expensive scarf knitting kit on a 'lifestyle' website; for a substantial amount of money you got a ball of wool which changed colour at regular intervals and a pair of needles. The idea is that you sit and knit (with or without the company of soft music and  candle) until the wool changed colour. Then you will feel - however you feel - presumable all calm and refreshed.

I like mindless knitting that I can do while watching television or listening to the radio or a book. I'm not so experienced that I can knit and read a book like some people I know.

The mitred square blanket is an excellent project for mindless knitting. You just need a basket of wool - bought for the purpose or left over, and suitable needles.

I made one as an experiment as and use it to protect the settee from the cat that usually sleeps there; 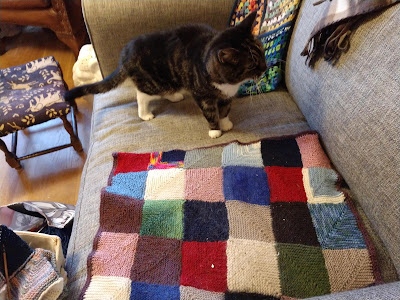 No, not that cat, the other cat. I followed the instructions to begin with, using thinnish wool and 3.5mm needles. However I kept getting confused as to which row I was on. And my diagonal patterns were all inconsistent. Then I had two brainwaves; I decided not to care about he direction of the diagonals, and I adapted the instructions so that it every row followed the same process. So once you have the right number of stitches on the needle (in my case 40) and the mark placed in between the 20th and 21st stitch, proceed as follows;

Knit to marker, slip marker, knit two stitches together to decrease by one stitch, knit the to the end. That's it. When you end up with just two stitches, get rid of the marker, pass one stitch over the other, cut the yarn leaving a tail of a couple of inches to be darned in later and pull this tail through the remaining stitch to secure. I did have hundreds (so it seemed) of tails to sew in later, but I notice on another blog the knitter just 'knitted in the tails as she went along'. Interesting idea for the future.

I had about 5 balls of double knitting, all part used, all left over from various ideas and projects. So, I have been mindlessly knitting for a while on sweet little short 4mm needles, whenever I was in the mood. It doesn't take all that long to complete a square. 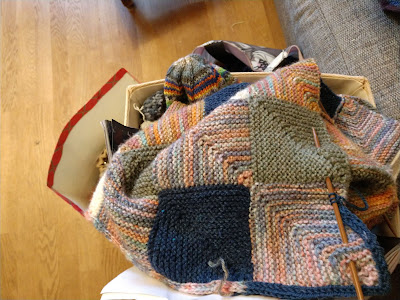 I know have a small rug with 84 squares, all done with almost complete mindlessness. It needed an edging and since my double pointed needles were still in the knitting basket, I embarked upon An Adventure; I have learned how to do and Applied I-Cord Edging, I kid you not! 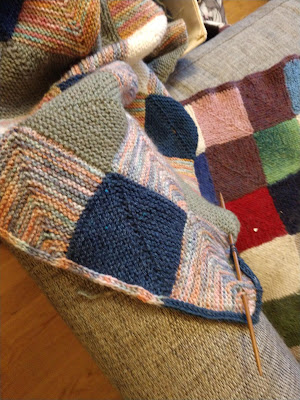 Lookee lookee! Now, this is Mindful knitting; it takes a lot of concentration to
Knit 2, slip 1 purlwise, yarn forward, slide the stitches to the left hand end of the needle, use that end to pick up a stitch through the ridged knobbly bit on the edge of the blanket, pass the 'yarn forward' stitch over the picked up stitch, and the pass the 'slip 1 purlwise' stitch over the picked up stitch, slide the remaining three stitches to the right hand end of the needle and start again. from 'Knit 2'.
But what a neat and classy binding! Magical! So far I have traveled up one side and just turned the first corner - that has taken two Sherlock Holmes episode (Jeremy Brett) and one Father Brown.
We have had more adventures with investigating oxygen concentrators; I had a long telephone  conversation with the respiratory nurse and, quite reasonably, she didn't want to advise anything without a consultation. She was also certain that the best solution would be to have a big oxygen cylinder at home, and a small one that we fill up when we want to go out for me to carry and breathe with.
I feel less than enthusiastic about this. I was just imagining taking the big cylinder in the back of the car when we went for visit friends or stay in a holiday cottage or something - that's not going to work. And we know from our experiments with our big 'portable' concentrator that the setting of 3 or 4 on pulse is enough to make a huge difference.
Well, Himself has spent several weeks researching what is available, comparing them all, reading the reviews and gathering information. Then he had a long phone conversation with a company that supplies these lighter-weight machines, and - reader, he bought one. It is sitting in the hall, quarantining before we unwrap it properly and charge it up and Take It For A Walk! I can't tell you how adventurous this all seems! I have celebrated by - going for a walk (without oxygen) of about 1.2 km. I could have gone further, but the pavements were busy and the temperature was dropping...
My final adventure starts this evening; I have a piano pupil who wants to study for Grade 8. Which means, of course, that I, too, will have to study for Grade 8. It's a long, long time since I played 'difficult' pieces. The book arrived yesterday; I hope she doesn't want to learn this one; (Toccata by Khachaturian) 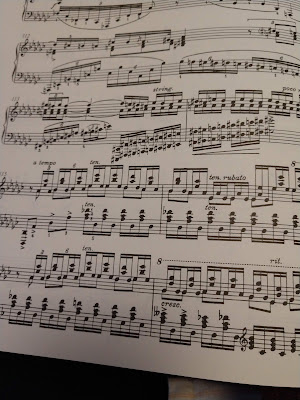 This looks more my style, although the next two pages have interesting' moments...(Snow, Moon and Flowers by Peter Sculthorpe) 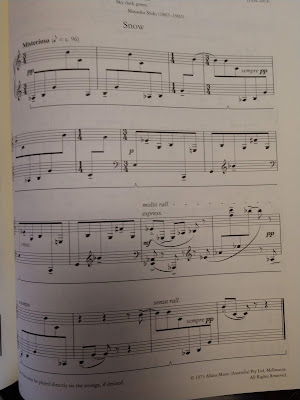