Getting back into the groove of piano teaching was a bit of a shock, but I have made it so far. My teaching week ends on Saturday morning, with Friday usually being a non-teaching day.

It's been a fairly busy week in a slow sort of way; when I write down everything that I have done at the end of the day then I realise how much did, or didn't get done.

When was the 23rd February? Last Tuesday? That's when I spotted that all the little tete a tete narcissus were looking very enthusiastic. I drew a rough sketch on the corner of an envelope of a letter to a friend; 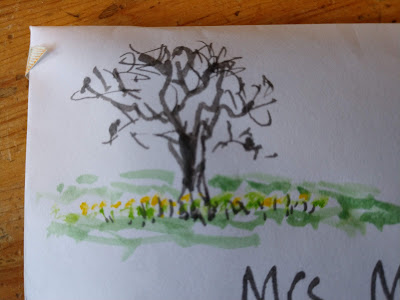 They have been in the garden since January 2016; when my mother was in a nursing home that winter. I used to buy several pots of them in bud, and put them on her windowsill. Once they had gone over I would replace them with new pots, and just plant the old ones along the back hedge. I think this is the best they have ever been. 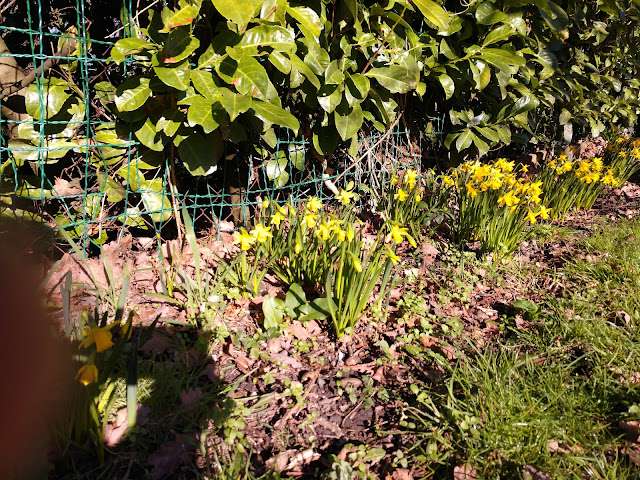 I also refiled all my fountain pens with various inks on Tuesday. I find it such a messy job. 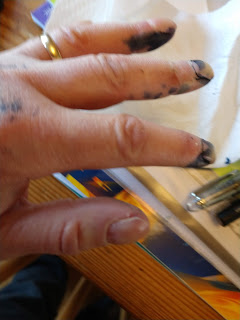 I started a linocut of daffodils on Wednesday; first I drew the design on the lino with a Black Prince pencil - I remember those from my Kindergarten Days - they were slightly thicker pencils with a shiny black lead. How I have ended up with one now, I have no idea, but it is perfect for drawing on lino. My big problem was remembering to LEAVE the black lines uncut, instead of cutting along them. 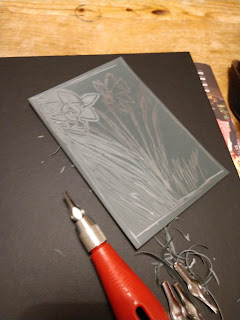 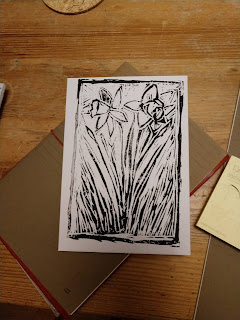 I'm also having a trial run through a pattern for a tea cosy. It is in traditional fair isle, knitted entirely round and round like a tube, Then, the dangerous magic happens; you CUT a slit on either side for the handle and the spout and do something to stop it all coming to bits. 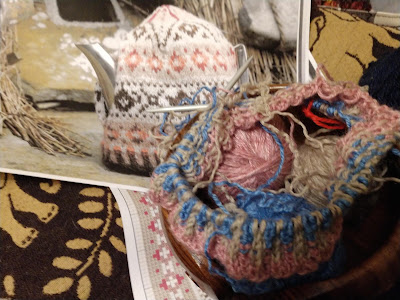 I've got the proper Shetland yarn to knit the one in the picture, but while I was waiting for the smaller needles to arrive, I thought I would make one to see how it works, using the wrong wool in the wrong colours on the wrong size needles. It's a good job it doesn't have to fit a person, just a teapot.

I'm a bit further on; it looks ok on the outside but the inside is a knitter's nightmare, full of loose ends from the colour changing, and loose ends because the wool I am using is from some other jumpers and I have discovered it is all in shortish bits, about a yard or so long. 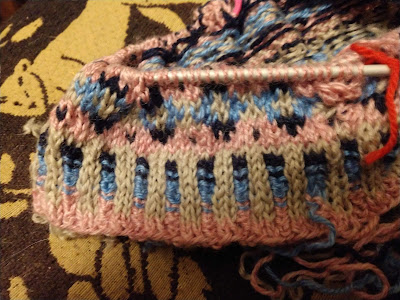 Today has been a lovely sunny day, if chilly in the shade. I've been able to spend quite a lot of time outside. Even the cats have been out and about.

Leo prefers a nice stagnant buck of water to the fresh water in her bowl. Of course. 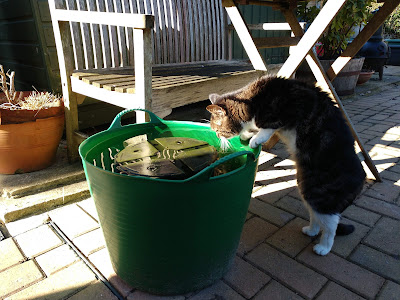