- where did all those days disappear to since the last time I posted on this blog?

Some of them disappeared in a kind of sleep-walk - there were a couple of 'zero-energy' days when neither of us could summon up the 'oomph' to get more than the absolute minimum done. The weather was cold and bleah, the days were samey and grey... all I felt like doing was eating chocolate and buying stuff on the internet. The cat felt the same way. 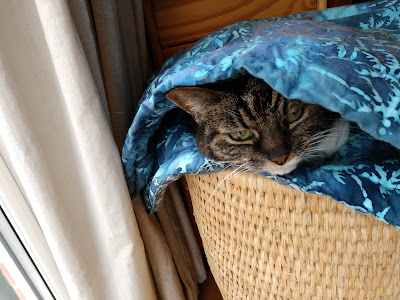 There was nearly a catastrophe when we hadn't realized that Leo had managed to climb inside her duvet and we were going to sort it out and get rid of the strange lump that had appeared in it.

Luckily I had just enough strength of mind left to keep both chocolate eating and internet buying within bounds. Although I now have a great list of stuff due to be delivered over the next few days.

The veg plot is well underway now. I would like there to have been more signs of life, but so far I have two sticks of rhubarb and a fine display of tiny salad leaf seedlings. A few peas have emerged, and I am hoping the sun will encourage some more to appear. No sign of spinach, radish, brussel sprouts, spring onions or carrots yet.

Yesterday it was warm enough to sit in the garden and paint; 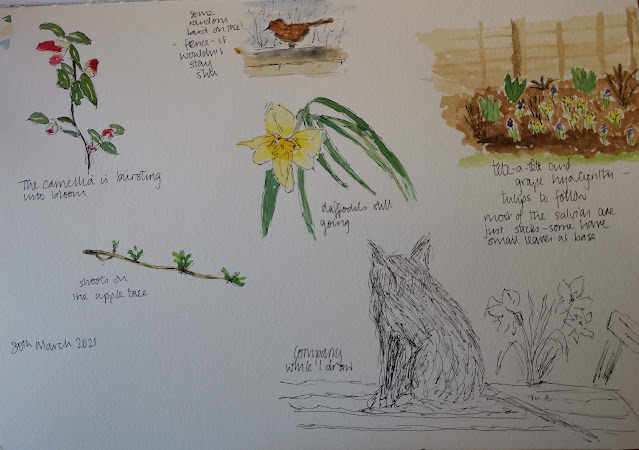 The cat is drawn using a method I call 'emergent drawing'. I just keep drawing and drawing until a cat emerges from the lines. I stole the description from a method of teaching writing which was popular back in the 1990s, or maybe earlier, called 'emergent writing'; I was a bit sceptical but it seems to work. The child (pre-school, or reception, or early years) starts by just 'pretending' to write - doing wiggly lines to make shopping lists or stories - and over time and with appropriate teaching and encouragement these first 'writings' become letters and words and sentences. Well, that describes my drawing method exactly. 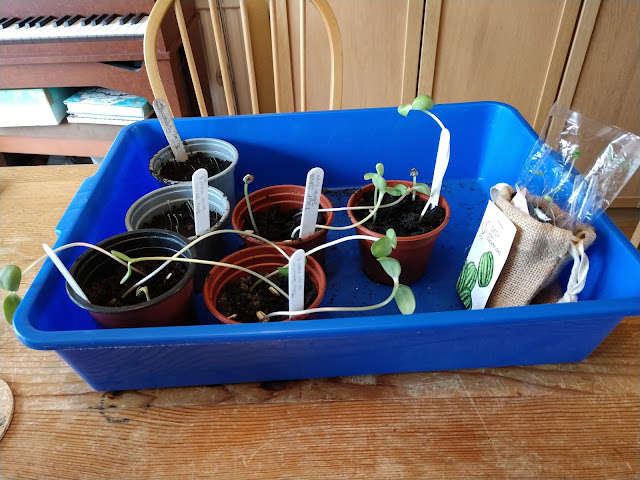 The sunflower seeds are all ding well. But very floppy. I plan to stake them all using the bamboo skewers I discovered when I reorganised the cutlery drawers using these rather clever thingies. 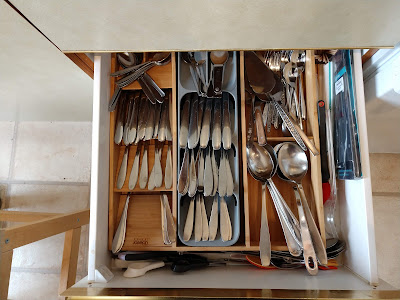 We just have to chant 'little on the left' as we open the drawer to know which size is where. There is a tiny symbol printed on the edge by the handles to show whether there will be a knife, fork or spoon on the other end. (you don't need to tell me that 'large on the left' would work as well; I have put the little knives on the left and That is That!)
There is a grey cutlery organiser buried on the left hand side of the kitchen drawer, holding the small implements like pastry brushes (we have two?) small blue sharp knives (we have three?) apple corer, lemon zester and so forth. The big green thingy is a splendid contrivance for coring and slicing an apple all in one go. 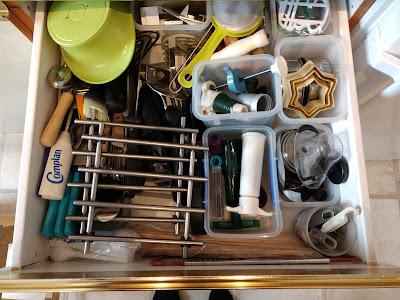 It is a great pleasure to be able to open the kitchen drawer without a struggle, find an implement without impaling oneself and then close the drawer again, all without a single expletive.