so, nearly a fortnight since my last post - had you given up on me? 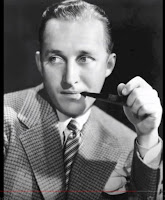 or, without the music; 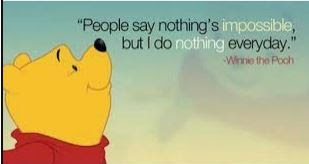 The Disney Winnie the Pooh cartoons came out when the children were young - they were on the tv non-stop. Can't say I liked them much

So, what kind of nothing have we been doing?

The 'lawn' is covered in tiny violets - also dandelions which Himself declared war upon; years ago we bought a special dandelion-dealer-wither-sort-of-thing and it still works. The front 'lawn' has bare patches of not-dandelions-any-more interspersed among the moss. (A whole new crop appeared a day or so later - this seems to support the warnings against using anti-bacterial products which kill most of the bacteria leaving room for even more bacteria to colonise the cleared space). 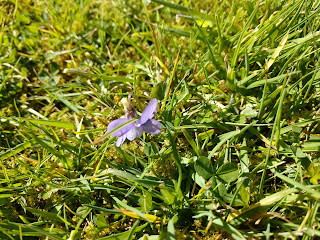 The camellia appears to be loving its new place n the garden and was covered in flowers until; 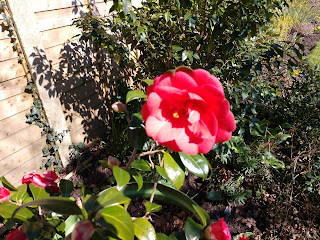 the weather forecast became ominous, and I even wrapped up my strawberries and vegetables in bubble wrap as a protection against sub-zero temperatures 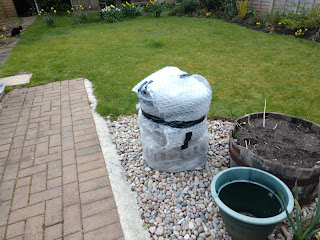 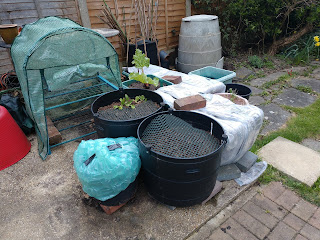 This weird little bird is supposed to predict the weather, and all those fern-like crystalline growths in the solution indicate snow... 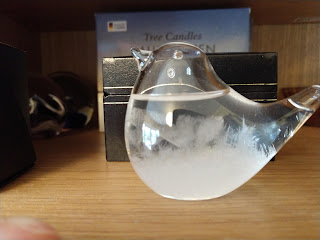 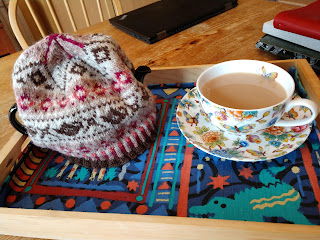 In one of the sunny but freezing cold spells we managed a 'hello there' when some of the family swung by after visiting my father for a picnic lunch, all well wrapped up in blankets and no need to chill the prosecco.

And in another sunny but freezing cold spell we managed a birthday presents and Easter Eggs exchange with the offspring down at the seaside. It was cold enough that turning round and going straight back home again seemed like a good idea, but, fortified by a slice of chocolate cake, we managed a short walk towards the sea and along the front in the sunshine, and then what seemed like a never-ending trek back the way we came after the sun had gone behind clouds and the wind fiercely in our faces.

This morning I had the pleasure of sitting out in the garden with a friend having tea (on a proper tray with a proper cloth, but using mugs as we were in the garden). In the sun, and out of the wind, it was perfect; I didn't even need to wrap up (mainly because I was already wearing a thermal vest, winter shirt and thick guernsey jumper!). She has carried away another two bags of music teaching resources - I am sorry to see some of them go...

'You sound like you are missing the class teaching,' she said - well, yes, and no. I'm not sure I am up to singing 'John Kanakanaka over and over, three lessons a day, with the children facing their partners in two concentric circles and doing dosy-dos moving to their right twice in each verse; vastly entertaining for the teachers to watch the chaos, and I'm sure there was an educational element to the activity...

I'm sorting out the piano lessons for when term starts - I have never had so many relatively advanced students at the same time and now have to actually Learn a stack of music ready for Monday. Starting with the slow movement of Beethoven's Pathetique sonata, Bach Prelude and Fugues, a Mozart sonata or two... my days of 'blagging' my way through the pieces are over.