Ten days since my last post! Did you miss me?

I have been doing things over the last week, but what, I am not entirely sure. Everything seemed to become slippery and slide through the cracks of timetables and schedules. To be fair, that's what usually happens towards the end of term, or the end of half a term.

We are now in the half term week - indeed, it is Bank Holiday Monday so it should be raining, but it is not, so Himself is out there watering. There is a plant halfway down the border which will have masses and masses of radiantly yellow flowers at the end of Summer, and is also an excellent indicator of whether we need to water the garden. It suddenly, and without warning, goes all wilted and collapsed and we rush to get the hosepipe out. Useful for non-gardeners like ourselves, but rather over dramatic, in my opinion.

What have I been doing over the past ten days? I knitted a sock. 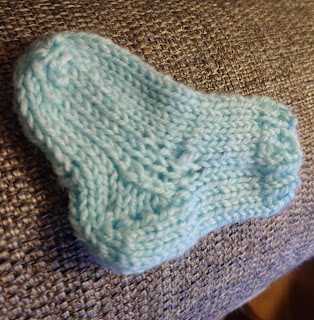 Just the one; I found a tutorial for knitting a small plain sock so that one can learn to 'turn a heel' and 'graft a toe', without committing to the full blown expenditure of time and money that a pair of socks for a grownup would require. This one would fit a labrador-sized dog, at a pinch, certainly too small for a Great Dane and too big for the cat. Will I knit the other? Hmm. This sock has been carefully posed and arranged for the photo opportunity so that it appears to its best. It would be a case of knitting a replacement for this trial effort, and then its twin. But you only need 20 stitches which is not too much effort.
I am trying to work out why I took this picture of laundry waiting to be put away. Perhaps I didn't mean to take this picture at all. I can't think of any deeply significant point in connection with it. 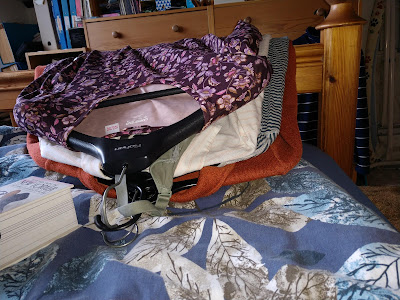 I have finished knitting and finishing off the weird poncho thing. There is something very wrong with the neck; if I had sewn it up as meant, there would be no way I could have persuaded my head through the hole. So I am pretending that it has an asymetric collar (just visible in the photograph), and have banished it to the bedroom. The various patterns are entirely random, made up, and imperfect; I decided early on in the process that the mistakes didn't matter. 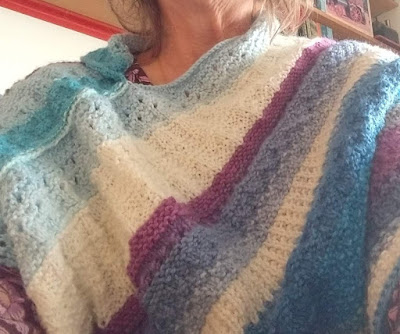 However it has turned out to be the perfect thing for wearing as a sort of shawl when sitting up in bed to read or have breakfast-in-bed. So, even though I'm not a fan of the colours and it is more mistakes than anything else, it is functional and appreciated. I'm sure there's a metaphor for life in there.
I'm making hats for Christmas shoe boxes with the left-over yarn. This is a 'Magic Hat' and you can get the pattern for free from a knitter called P is for Parsnip; it stretches to fit a child or an adult.
You can wear it with the brim down 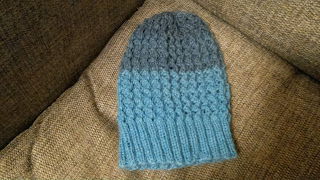 or the brim up, and I seem to have managed to photograph the side without the miscalculation which caused the wiggly lines in the pattern to go straight for a little while. 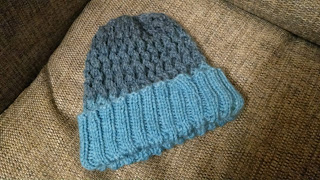 Hurrah! This blog post has caught up to today, and lookee lookee -
for the first time since Christmas we sat at the table to eat our lunch. 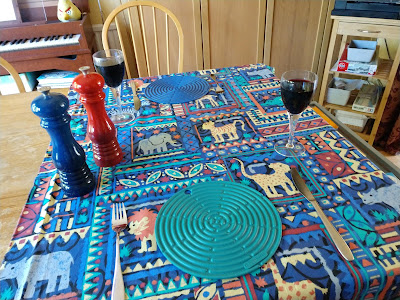 We usually sit in the sitting room with a tray on our laps watching yet another episode of 'Aerial America', 'Antiques Road Trip' or some Famous Name travelling around Britain/Europe/The World by train. But eating spaghetti bolognese from a tray on your lap is fraught with difficulty and I finally reached the end of rescuing strands of tomato coated pasta from the front of my white shirt.
So I cleared one end of the table, found a piece of cloth to act as tablecloth (you may have spotted it in previous posts as I have used the rest of it to make project bags and tray cloths) and we sat and had lunch like civilized people. I have hemmed most of the cloth this afternoon, and will make napkins as well, for future meals.
If we are desperate to watch Richard Osman's House of Games, which we both enjoy at tea time, we can always see if we can make it play on the computer.
Meanwhile, I think I deserve a pot of tea; I've chosen the 'Revitalize' tea but I'm not sure it it will help me to be all that energetic in this heat. 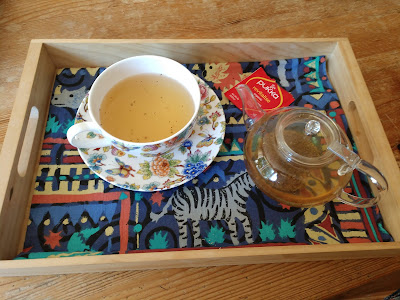 Now, before I can totally switch off, I need to type up the lesson notes for a piano lesson from this morning (yes, indeed!). The slow movement from Beethoven's Pathetique Sonata, and a Bach Prelude and Fugue was a bit of a full-on way to start the day. Luckily she's at the early stages of learning them, so I don't have to appear to be very proficient yet. But she'll be catching up with me soon.