The weather changes this week from cold and wet to a few days of hot sun, a day of determined continuous rain, and now a mix of sun and clouds coming and going.

Half term is nearly over - and a curious 'break' it was too.

'Break' seems to have been be the operative word;

Dishwasher - the pump started whining like a muted dentist drill. On investigation we discovered that we had bought it quite sometime ago, repairs would be expensive and not necessarily successful. So we have a new dishwasher, spookily silent when it is running, and swallows up so much in one load that we have unearthed the extra plates and bowls.

Cooker - one ring has been making odd 'ticking' sound as it heats up for quite a while now. So you can't say we hadn't been warned when, one day, everything was ready to eat except the oven chips. They were still pallid, unappetizing and COLD. With hindsight we should have gone ahead and eaten the rest of the meal while the chips were being blasted with heat in the Air Fryer. We could have pretended that they were a separate course. Instead we had warm steak and veg and burning hot chips.

Once again the paperwork, and investigations on the forums brought the conclusion that replacement would be better than repair. I suppose we could have carried on with the cooker, using whichever rings still worked, and the top oven, until finally something melted or caught fire or the exploded with a bang... but the new cooker will be delivered later this month.

The Kitchen Floor - well, one thing usually leads to another, and installing the new dishwasher meant disturbing the plumbing which meant that the kitchen floor started buckling - the result of a slow leak in the water connection to the dishwasher. This was easily fixed, in terms of mechanics - merely a matter of cleaning and re-seating a washer. The floor has been persuaded to lie flat again too; the heavy work involved pulling out and pushing back the dishwasher.

The small hammer drill - I won't go into details, but it seems that if don't use a hardened bit in a hammer drill (because an ordinary bit had got into the box of bits, are you still with me?) and you encounter a surprisingly hard piece of wood when you are drilling, you can end up riveting the bit into the thingy that holds the bit. By 'bit' I mean the specific thingy that sticks out of the business end of the drill and goes roundandroundandround very fast and makes the hole. We have proved this to our dissatisfaction and ordered a replacement drill.

Teeth - did I mention a dentist earlier? We both had a 'routine' visit - and what has been 'routine' about the past eighteen months, I ask you? (rhetorical question, please don't reply) - I got off fairly lightly, but we knew that Himself would be 'in for it' as a chunk broke off a tooth several months ago. He's having another crown. I am more than a little apprehensive about the visit to the hygienist we were told to arrange. I've managed to dodge this experience for more than a decade, but like Nemesis it has caught up with me.

In between times I have finally made up the fabric I bought back in 2019, or even 2018, perhaps. I thought I would play a game of 'Sewing Bee';

'sewists, you have one afternoon to make a simple summer top' 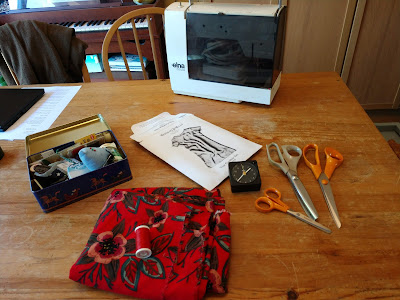 That is worth a whole blog post on its own... I could add 'sewing machine' to the list of items that stopped working...