And other things that are chomping their way through my vegetables...

Yesterday a vine beetley weevily thing had the temerity to drop into the sink from among the leaves of the lettuce I pulled from the garden. I quite like the smart look of the beast; its shape is sharply defined in an attractive dark, dusty, charcoal black; but its horrible white maggoty larva wriggling obscenely in the soil are very upsetting.

I am going to send off for nematodes in due course - apparently Spring and Autumn are the time for taking action. Like, May and September, which isn't now.

I dug about in the soil of that particular pot but couldn't find any larva... I'll have another prod about tomorrow.

Other woes; fox pooh. A pungent pile of poo greets us every morning. Somewhere it said that vinegar is a deterrent, so I have sent off for a 5 litre flagon of the stuff, 'for cleaning purposes'.

In the meantime, last night, I thought I would have a go with a bottle of Sarsons. Reckoning that pouring the vinegar onto the grass might not do the grass any good, I poured it into foil trays and weighted them down with brick. 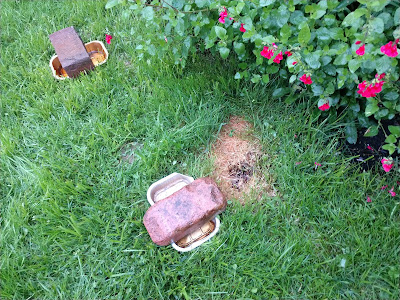 It sort of worked - sort of. Today's pile of poo is about a foot further over from this patch. (Don't the salvias look good!). I have refrained from taking a picture of the poo - I'll leave that to your imagination. Now I have no vinegar in the house for the fish-and-chips lunch I promised my father on Tuesday - which may, or may not happen anyway - and am also expecting a delivery of 5 litres of lemon scented vinegar. I shall be able to do lots and lots of cleaning.

Meanwhile the quartermaster is searching on line for phase 2 the anti-fox war.

Something is making a meal out of my basil and it is not me. 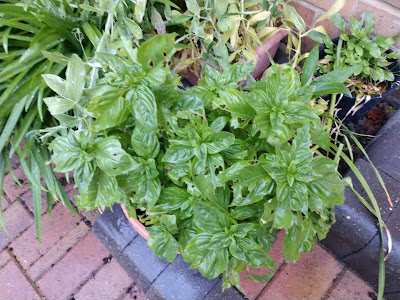 The sour dough adventures continue. A lot of sourdough started gets discarded along the way, but there are also plenty of recipes for using it up. I sort of adapted a bread-machine recipe for cinnamon and raisin sourdough bread and produced this 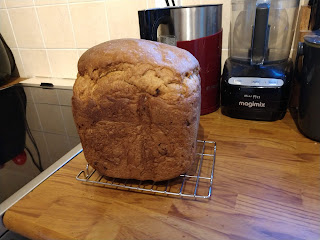 I was lucky it didn't stick the top crust to the lid of the machine! It is very good toasted, although toasting it is a slight challenge as the loaf is so tall. About a quarter of the slice sticks out of the top of the toaster. 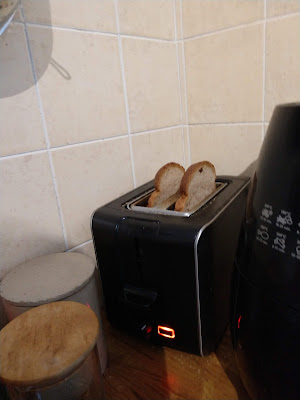 After a short time (it burns easily, believe you me) you have to ping the red button and put the toast back in up-side down.

The new dishwasher is a great success. It is almost silent; how can it be washing the dishes without sloshings and churnings and rattlings? It dries everything like a dream, and takes forever to unload because it takes just about every plate, cup, bowl and mug we own to fill it. There were no bowls left for our pudding, so we had to use these, from a set of four called 'the proof is in the pudding'. I got a prime numbers theorem; his was Pythagorus. I understand Pythagorus, but was not in the right frame of mine to consider prime numbers. 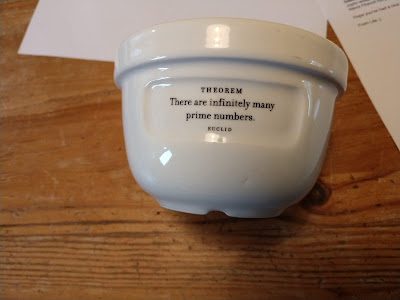 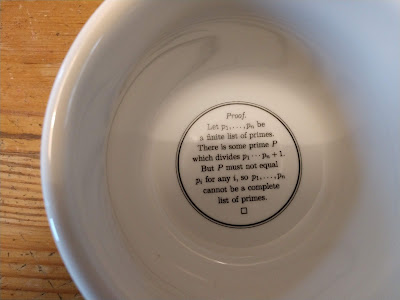 It is raining, again. Any moment now Leo the cat will appear, and leap onto a lap demanding to be dried off with a paper tissue.
Posted by KirstenM at 14:58:00