Confusing metaphors - I am now winding things down as I prepare to wind up this term's teaching for the Summer Holidays... tallying up my accounts for the term, setting the students up with 'easy' and 'fun' things to do over the holidays and generally taking a relaxed approach to lessons. I've 'done' all the exams, except, possibly one, that is to say, the students have done their exams, but as they are recorded in lesson time over zoom it feels as though I have been doing them too.

I reckon the last student's exam will spill over into the end of July - but apart from him I've set an 'end of year date for July 18th and That's That.

I've removed the anti-fox poo trays, on the advice of a friend who pointed out the the vinegar would eat its way through the foil tray then instead of being 'failed-fox-deterrent' would start becoming 'efficient weedkiller'. It seems to be a good slug-killer though, there were several pickled slugs (I feel a slight pity for them) in the trays Poor foolish molluscs.

I have an idea;  pour the rest of the vineage over the solid paving and pebbles, which are supposed to be weed-free, as combined a weedkiller and mild fox deterrent and slug destroyer.

The foxes had better find an alternative route soon, as the package of 'Scoot' has arrived, so we are upping the level of aggression... A neighbour told us that people further down the road are FEEDING the foxes 'oh, they are so sweet, we love to watch them playing in the garden in the evening'. Grrrr.

We've bought some new bathroom scales. Un remarkable, except this seems to have coincided with me suddenly gaining 3 pounds. The old scales were bought with Green Shield Stamps 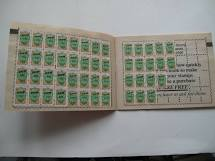 Remember them? People are selling them on ebay! For money! Do people still collect them? Can you still get things with them? You don't have to answer but I'm not sure that I really need to know this.

The scientific hypothesis is that the springs of the old scales have become stiffer (rusty?) with age and therefore are 'weighing light'.

My father and my Uncle came round for lunch in the garden - the forecast that said 'rain at lunchtime' was luckily incorrect - the other forecast said 'rain later in the afternoon' which is what did happen, so we had a very pleasant time and then did not need to water the garden.

There was a strange beeping noise from the kitchen while we were sitting over our coffee; McCavity the cat (at 19 years old she is the same age as my father, if you get what I mean) was engaged n a stealth raid on the cooking trays for the fish and chips, had sampled the fruit sponge pudding and had settled her attention upon the cream pot. We have an induction hob, and she had crouched down with her paws on the control panel. The beeps were because the cooker was objecting to being instructed to heat up rings which didn't have steel pans on them.

It's a good thing that the pans were on silicone insulating mats otherwise pans and paws may have become rather warm...

After today I will have just two weeks of teaching and then I can look forward to going nowhere for the next six weeks.

If I am going to have to stay home for a while longer, I am jolly lucky to be living here.