Thursday 5th August - Oh, just this and that...

I've been meaning to write a blog post for a few days, and then I just... oh, something distracts me on the way to the computer, or once I have arrived at the computer - you know how it goes.

I admire people who post every day. But then, when they don't post for a day or two, I worry about them, especially older one lady who has been feeling under the weather. I have a couple of months - like November - when I do a 'post every day for a month' challenge.

This isn't one of those months!

So, anyway, here's a selection of snippets...

Number 1 Son did a rare blog post recently entitled 'Computer Specs'. I read on, to see if he had gone to the opticians (I need to go) and come back with glasses for working on the computer - it seemed a possibility in his line of work. But n, it was all full of letters and numbers relating to the thingy whatsits that we was replacing in his current home computer. I read through in vain to find a complete sentence that made any kind of sense to me - the gist is, he is happy rebuilding his computer. Good.

I ordered a new sketchbook for August - it was a bit disappointing that delivery wouldn't be until 2nd August, but never mind - what's a day or two? It was even more disappointing that I had clearly gone into one of my 'for heaven's sake just pick one' moods after going round in circles examining all the options and sizes available, and  ended up with something that is considerably smaller than I had planned. 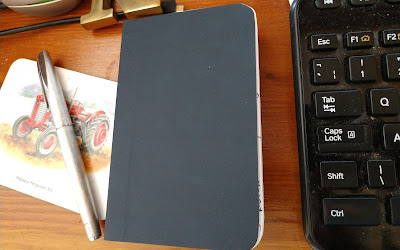 Lovely quality paper; it is perfect in every other respect! It is made by Stillman and Birn, their zeta series. Once I had recalibrated my expectations, I made a start; doing two days at a time in order to catch up. An imaginary picture of 'Black Rabbit Hall' using 1-point perspective as explained in the 'Learn to draw in 30 days' book by Mark Kistler 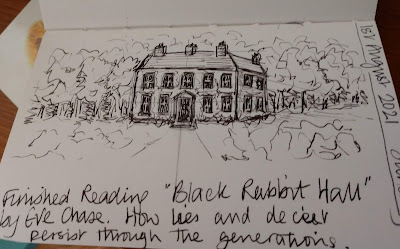 and tracings of 'The Virgin of the Rocks' by Leonardo Da Vinci', for 2nd August. This is an exercise from the same book, for learning to draw faces. 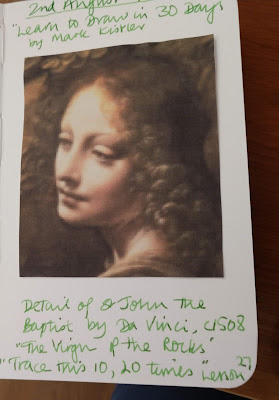 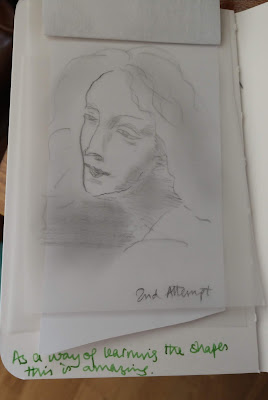 I have been immensely impressed with this 'How to Draw' book - suddenly I find myself drawing in a way I never managed before. I finished the book today, and sent off for the next one in the series called something like 'Draw this in 30 minutes'.

The advantage of such a small sketchbook is that it is very easy to fill a page...

Now I have to deal with the 3rd and 4th of August, and then tomorrow the 5th and 6th? I wonder how long it will take me to catch up with myself...

The book club managed an outdoor meet up, for a cream tea, in someone's garden, on Tuesday. About 6 of us, no, exactly 6 or us - we were all complete with no bits or pieces left at home.

“Then you should say what you mean,” the March Hare went on. “I do,” Alice hastily replied; “at least — at least I mean what I say — that's the same thing, you know.” “Not the same thing a bit!” said the Hatter.

BB and I watched a programme about the V and A - how I look forward to going back there - with a segment on the current Alice in Wonderland exhibition, particularly the famous tea-party. 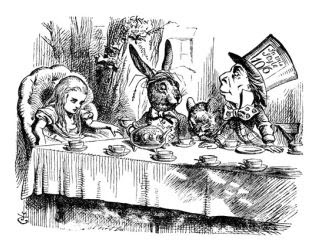 Although our tea party didn't reach the heights of chaos as this one. They showed - that is, on the V and A programme, are you still following me? - a clip from the Jonathon Miller film which I had never come across. Now I NEEEED to try and find a recording to watch! They used to show us the Disney 'Alice' as a 'treat' at prep school on Mother Superior's Feast Day; it terrified me every time, but there was no escaping the 'treat'. Alice or Bambi. Ugh.

Oh yes, the book club. Well, the last book was Sara Dinsmore's 'Darkness in Zennor', set in the time of World War 1 when DH Lawrence and his German wife were living in Zennor. Good, but not 'happy'. This month's book is 'Precious Bane' by Mary Webb, which I got hopelessly mixed up in my mind with Thomas Hardy's novels (none of which I've read. It just sounds like a Thomas Hardy book, I suppose).

The only other thing of note is that I drove to the meeting. By myself. In the car. There and back, without mishap or alarm. That's the first time I have driven the car since May 2020 - there has been no need drive anywhere before as BB did all the driving.