Well, that was a bit of an....experience.... but most things will settle down with a cup of coffee and some cake.

I've been to the opticians today- about two years overdue - and am now slightly reeling from the cost of my glasses, even including the 'two-for-one offer. By the time I have chosen the not-basic frames, and the thinning level2 to make the lenses lighter, and the reactions lenses, and the super coating...

No, not that bad, if you reduce it to 'so much per day'. I put my glasses on first thing in the morning, and take them off last thing at night, so it is worth the cost of lightness and size of lens and add-on-extras. I have chosen a different colour, sort of speckley-blue and tortoise-shell, as a change from the metallic red of the past three of four years, with the second paid being very different (for me); pale greeney-blue.

The 'interesting experience' bit was how something that seemed relatively 'covid-safe' rapidly disintegrated as the time wore on. As part of the general chit chat (I had a very chatty optometrist) she let slip that her partner had tested positive for covid some days ago 'but I've been taking lateral tests every day and I haven't any symptoms so you needn't worry' - it's all in line with the guidance...

I shuffled my chair back and digested this unwelcome bit of information. The reality of how the rest of the world is 'returning back to normal' was landing at my feet, in my face, with a thud.

'I put on my booking form under 'additional information' that I am clinically extremely vulnerable', I said, once I had reduced my concern from a 'rolling boil' to a simmer. She did look stricken, and was at pains to reassure me that she hadn't seen her partner for ten days, that they had separate bathrooms, and she just thrust his food at him through a crack in the door.

We continued amicably enough through the rest of the consultation, while I silently rechecked my personal risk assessment - she was wearing her mask properly - I had a PP2 facemask on, tightly sealed around my nose - we were keeping a distance from each other.

Then, downstairs, I went through the three separate procedures of choosing my glasses, waiting for a technician to fit the new glasses, and then waiting to pay for them. Meanwhile the shop, which had been quiet, suddenly filled up with a dozen or more families and young children, released from school and ready to have eyes tests, have glasses fitted, collect their glasses.

I was not a happy bunny, and very close to just walking out and saying I'll come back and finish this another day.

'Do you find you are losing your confidence at going out and about if you have been shielding for so long?' I was asked at one stage.

'No, I haven't lost my confidence at all at going out. But I have completely lost confidence in the general public to behave appropriately when They are out and about.' Maybe that came out more sharply than was expected.

A little drawing and colouring-in of vases of flowers is called for, once I have finished my coffee and (small) piece of cake. (Lemon drizzle - make a two-egg Victoria sponge, adding the zest of the lemon to the mix. I use the 'all-in-one-method' with softened butter. Sometimes I use a little extra flour in the mix. Other times I don't. In a separate bowl mix the juice of the lemon with a tablespoon of granualated sugar. Bake the cake as usual. When you take it out of the oven, stab the top of the cake all over, and pour or spoon on the lemon juice mixture, leave to cool in the tin). 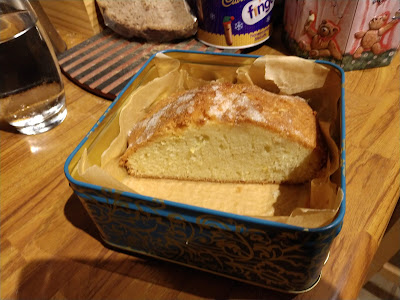 Today's Johanna Basford is going to the 'shelves of vases' page in her book, adding flowers and colouring them in. These are 'snipped' from her video for today. I shall go and do mine now. 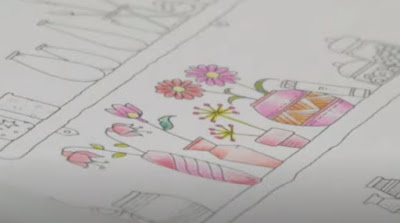