As the world contracts around me for winter, the scenes outside my window take on more than usual significance.

Why is there an Enterprise Hire van parked outside out house? Why are there two cars and a white van crammed into the shared driveway of the two bungalows opposite? Is the Hire van to do with them? Is someone moving in, or out?

There is an OpenReach van down the road - who is having their broadband upgraded? Or having their telephone repaired?

What are those roadwork signs further along about?

Oh look, a truck has appeared, and someone is taking a spade to the verge outside next-door-but one. What is going on there? Ah, the council are planting a cherry tree outside their house, and outside of their opposite neighbours. The local community clubbed together and bought the grass verges and odd patches of  trees and shrubs in the roads around us when they came up for auction at short notice. beating off the council. The fear was that the council would remove the grass to provide more parking, thus relieving them of the necessity of mowing the grass in future. Somehow this initiative passed us by, but I am glad we are retaining the grass. Parking in the street isn't really a problem, and makes it more interesting for the learner drivers as they trundle round and round and round, turning left at every corner until they are beginning to get the hang of the controls.

Stand away from the bay window.

Day 4 of Johnanna Basford 'Today we are going to colour in some flowers on this page. All my flowers are made up, so you needn't worry about getting the colours right.'

I started with making daubs of daubish watercolour 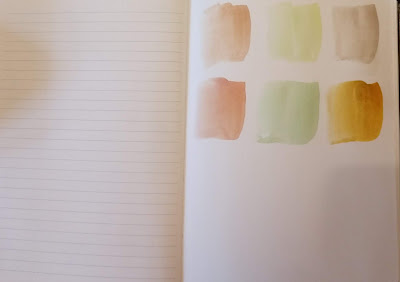 These are created just by dipping my brush into whatever muddle of colours happened to be in the bottom of the paint tray.

Then, while it dried, I got on with writing up yesterday's piano lessons. I'm still feeling a bit 'slow' after the booster jab on Sunday - a bit breathless - a bit fuzzy. Or maybe it is just the weather. Or maybe I need to perk myself up and pull myself together and get a grip. Who knows. (Who cares?!) So teaching a Chopin Nocturne (playing 22 notes gracefully in the RH down a long fiddly run while only playing 12 notes in the LH and making it sound all easy and flowing and undisturbed... hahahaha) was a challenge equaled only the Debussy, constantly managing two notes in one hand against three in the other, swapping which hand has the two and which has the three, and battling his unexpected choices of notes. It would probably help if I went to Specsavers; I am well overdue now for an eyetest.

I had a cup of tea to fortify myself to the lesson write ups, and somehow a candle is cheering at this time of year; 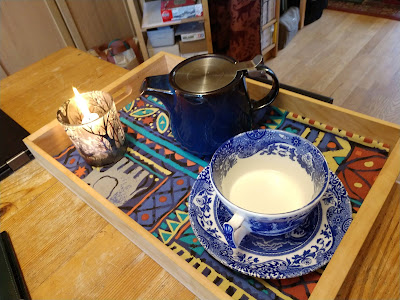 Then I drew my own made-up flowers. Johanna Basford always works in pencil first and then goes over in ink. I don't. This isn't (pause for reverential tone of voice) 'Art'. Just barely one step beyond doodling while on the phone. 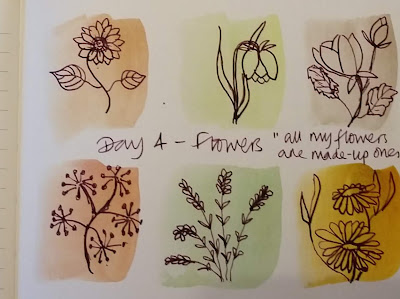 Colouring in with my cheap Crayola pencils isn't that effective over watercolour. You live and learn. 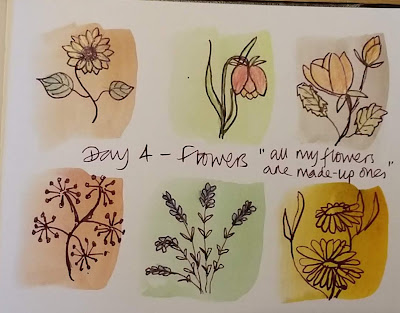 The sun is out but it is bloomin' cold out there. Tomorrow is another day for collecting steps.