I  rang my father this morning to ask how he got on at the bridge club yesterday afternoon. Halfway through the question I realised that I was a day out in my reckoning - he goes to play bridge on Friday afternoons... and today was - no, it still is, for a few more hours, Friday. I'll ask him again tomorrow...

It's felt like that off and on all day. I think it could be because this was my first week of piano teaching, and I've managed to arrange my schedule so that Friday is completely clear. So after the last lesson on Thursday it feels as though it should be the weekend.

It was a glorious sunny morning today, and I briefly considered suggested we drive to the coast and look at the sea - every so often I get this yearning to stand at the sea and just look - gaze - view - absorb... Then I thought, no, it's the weekend and the seafront is usually crowded with families and scooters and dogwalkers, making socially distanced walking a constant game of chess, steeping off the footpath and struggling through the shingle for a couple of yards, back on the path, back on the shingle. So I gave up on the idea. But of course, it was Friday, and we could have gone. Oh well. Maybe the good weather will hold for next week as well.

Meanwhile I did go for a short stroll up our road and back, not far, but far enough for fresh air, to listen to the birds, enjoy the sunshine, and discover How Cold It Is.

A friend brought me some daffodils in tight bud earlier this week. They began to think about coming out within hours, and now, a few days later, they are brightening the kitchen windowsill. 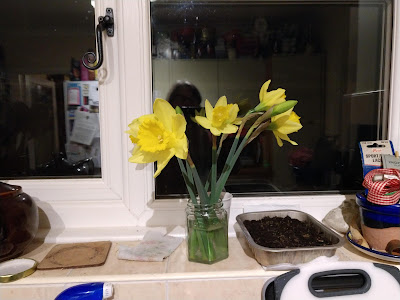 I took the picture just now, this evening which is why the background is black. The moon is nearly full - and for some complicated scientific reason we can see it through the sitting room window in the afternoon, a 'chalk moon', I call it, because that's what it looks like. I haven't quite got my head around why sometimes we see it through the front windows in the afternoon, looking to the east, and at other times at the back of the house in the morning, facing west. It has been explained to me, and I have read the explanation, but the reasons are clearly something that my brain has decided is not of importance to my happiness or survival. So, please don't try explain it to me again!
The tin tray beside the daffodils is a tray of rocket seed which I started off a day or so ago. They are just coming through; 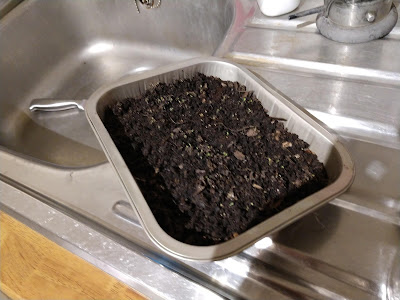 Following the instructions in the Huw Richards vegetable book I made myself a 'sprinkle bottle' by taking an empty fruit juice bottle and carefully poking holes in the lid with a kitchen skewer. I am glad to report that I achieved this without skewering myself, and it makes an excellent device for watering the seedlings without flooding the windowsill.
The mitten project is progressing well. The is the current state of the fourth attempt; 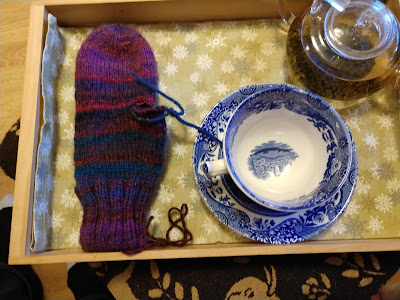 It fits fairly well - the right width, but a little long - my hands are pretty much shovel-shaped with broad palms and short fingers. I now need to pick up the stitches, currently kept safe on a piece of blue wool, and knit up the thumb. It seemed a good point to stop for tea.
I'm tending to use my glass teapot now. A change that has been rather forced upon me; I couldn't understand why I appeared to be slopping tea onto my tray cloths quite so frequently until I discovered that the blue teapot had developed a crack from top to bottom on one side, and the tea was seeping out, when I was using it. I'm rather sad about that as it was a present from a piano student's mother. Ah well. I enjoyed using it while it lasted.
Tray cloths? I can't help myself. I am my mother's daughter - all trays always had to have cloths on them. I asked her about that, and she said it was because her mother insisted upon tray cloths...
Posted by KirstenM at 21:01:00