Saturday 8th January - One week into the year

So, what have we accomplished this week?

I finished a mitten, and then ripped it out - it was the size of an oven glove, and the texture was far too open. Every little breeze would have gone through the fabric with barely a check. So I am nearly two inches along the ribbing of mitten number 1. By hook or by crook, I will finish a pair of mittens this month whether I want them or no.

One thing the last year has taught me, is that it is the process of  knitting that I enjoy, almost more than the product. Rather like growing vegetables.

I get all excited at the sight of little shoots appearing through the earth, but I am a good deal more 'take it or leave it' about actually eating the produce. I have ordered my broad bean seeds, and also a packet of spaghetti squash seeds - just 8 in that packet, but then, how many spaghetti squashes can one eat. They are very exciting - forget all that spiralizing stuff - these are 'ready-spiralized'. 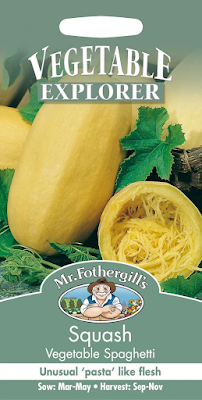 I can't remember which brand of seeds I ordered, so I am not endorsing Mr Fothergill's seeds.. But the picture shows you the general idea - when you open up the squash, you find delicious spaghetti-like strands inside. Yum yum. I am excited about these.

I've also ordered half a dozen seed potatoes for 'chitting', various other seeds, and also several little pots of tete-a-tete daffodils to brighten things up.

Our Polish neighbours who moved in last year are very enthusiastic gardeners, but have a different view of vegetable gardening; his parents, back in Poland, grow masses of vegetables as a matter of course. When I said I grew just a few large pots of this and that 'for fun' he paused, looking at me carefully, obviously revising his thoughts about vegetable gardening. I had meant to grow potatoes last year, but left it late.

'Potatoes are such hard work', he said.

'Not if you grow them in potato bags or large pots.' I explained about how you just cover the growing shoots with more earth until the pot is full and then tip them all when they are ready to be harvested.

'How many potatoes do you get?'

'Enough for a couple of meals'.

I think his idea of  a reasonable amount of potatoes is a cellar-full.

I'm planning to be guided by Huw Richards this year, 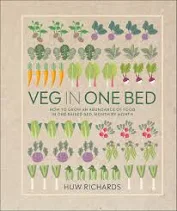 recommended by Ang in her blog 'Tracing Rainbows'. I don't have a 4 foot wide, 10 foot long raised bed, just an arrangement of 10 very large patio pots, each about 1 cubic foot in size, arranged on a moderately sunny patch of concrete where a shed once stood. I reckon I can adapt his plans

I bought the book too late last year; his detailed month-by-month instructions for December, January and February mostly consist of telling you what to harvest when - but I have nothing to harvest. I did just manage to plan garlic cloves in one tub within the deadline.

Meanwhile, I read the book, and other books (currently 'Miss Bunting' by Angela Thirkell, and listening to 'Over Sea. Under Stone' by Susan Cooper on audible), knit, and mooch about watching the rain.

The current bookclub 'read' is a podcast series on BBC sounds called 'Things Fall Apart' - all about how various movements suddenly sweep across social media - how, and why they started. Fascinating, and rather disturbing.