Sunday January 2nd - How long does it take to create a new habit?

In my case about 7 years, I think. Especially if it involves commitment and effort.

However I have managed to go out for a walk two days in a row. Not only that, but was persuaded to add a loop around the back of the pond near us... and was rewarded by the sight of a front garden full of early daffodils all in flower.

Stopping to stare at them was a welcome opportunity to pause and catch my breath before continuing on to the post box to post a couple of 'thank-you' letters to piano pupils.

In the grim mornings driving around in the half dark, watching out for the first green leaves (on the road leading up to Loxwood) or the first daffodils (at the corner where I used to divert down a tiny lane to take a short cut cross country towards Ardingly) was one of the pleasures of my old life as a peripatetic music teacher. The earliest primroses would suddenly appear on the sunny side of a steep bank further along the same tiny lane, and bluebells on a south-facing verge on the road to Petworth. Oh yes, I used to put the road miles in, back in those days, criss-crossing the county from East to West, North to South.

I used to think that the months of January and February were just two months of grey-ness, until I saw pictures of David Hockney exhibition some years ago - maybe this was it; 'The Arrival of Spring, Woldgate, Yorkshire' . You can click through the pictures at this link. I was disbelieving of the amount of colour he had used, until I started to look at the hedgerows more closely, and came to the conclusion that the colours were, indeed, all there, if not as bright.

I'm glad we got out this morning, because this afternoon closed in early with cold and rain and grey and early dusk.

I have been reading the January chapter of 'Nature's Remedy' by Emma Mitchell. It is one of the few books which is actually better on Kindle, if you read it on a tablet, as the drawings and photographs are so vivid on a screen, and you can scroll in to examine the details. Inspired by this I went into the garden (yes, in the rain, no, I didn't put on a coat, yes, I did get wet) and pulled a few springs from the herb planters to draw and paint. 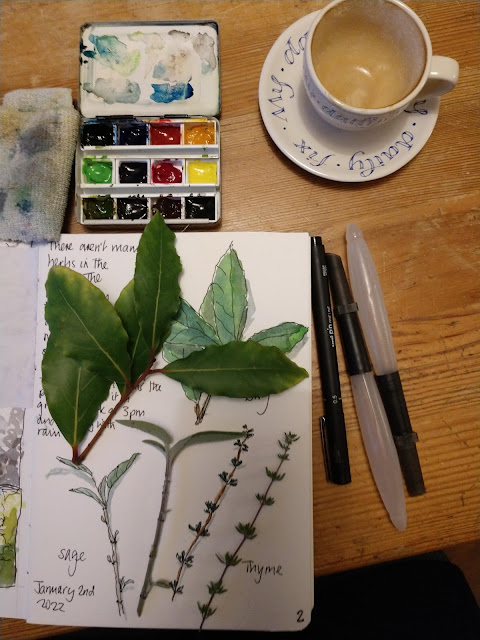 This must be the third time I am attempting to knit mittens. Why? Because. The first time they were going to be too small. The second time they were going to be a bit big, which I was prepared to put up with, but I didn't like the way I had done some increases, and also I had mysteriously acquired rather more stitches than the pattern suggested. I had been using the pattern from my Birthday present book 'the Knitter's Companion', but found an even easier to follow pattern online. So far it seems to be going well. It is really a practice run for knitting a pair of socks. Here's a link to the pattern I am using. 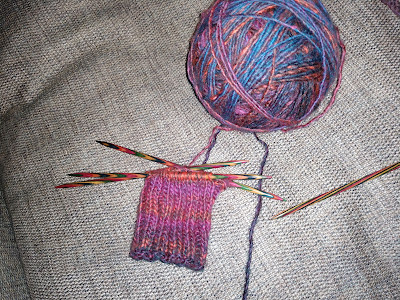