What? But yes, and this is all I have to say about removing all requirements to wear masks, discontinuing free testing for covid, and any other nonsense about 'the pandemic being over'. If you wish to disagree with me, don't. Just don't. Not here, not now - I'm too mithered about everything at the moment.

Moving on to other things....

I made no-knead olive bread the other day - the same recipe and method as before, except I added a load of olives chopped into quarters. About three-quarters of a pint. The recipe is all in American cups, which seemed dreadfully inconvenient, until you google and discover that it is 0.416337 of a pint. So that's easy. Half a pint will do.

I also left out the salt, as the olives were in a mixture of brine and oil, so plenty salty enough even after I drained them. 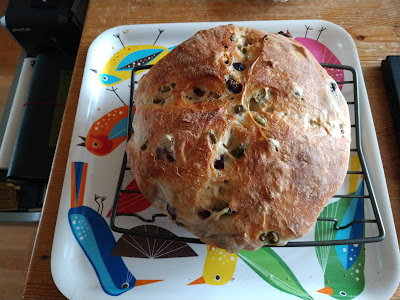 I did wonder if the salt would inhibit the rise, but it all seemed fine. We had some with cold meat last night, I have given some away, we will eat some more with soup tonight and the rest tomorrow, or slice and freeze. The next experiment along these lines will be to make a giant hot cross bun. Soon; I'm not waiting for Good Friday.

Other baking news; I have dealt with some out-of-date suet by melting it up with bird seed and mealworms. Yum. Delish. I was pleased that I managed to prise it out of the dish once it had set 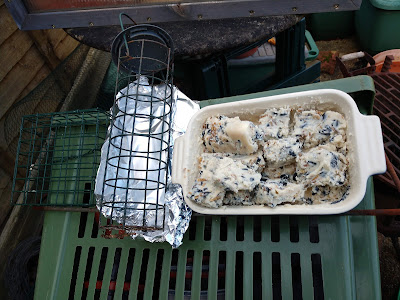 (that was by no means a certainty) and have put it into the bird feeders, wait, did you think WE were going to have it for our lunch? Now I shall have to see if the birds want to have anything to do with it.

Talking of Lent; I have restocked the chocolate box we were given for Christmas; 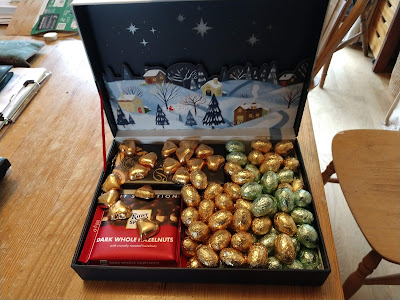 yup, mini-eggs and chocolate hearts from Devine, and underneath are various bars of dark chocolate. We are not giving up chocolate for Lent - I never do, because one of the New Year resolutions that I do manage to keep is to eat chocolate several times a week.
I have calculated that I can also keep my promise to myself to buy no more than one Persephone book per month if I order it at the beginning of March and the end of April, while at the same time giving up buying or downloading any new books over Lent. (I still haven't decided if the Persephone book thing only applies to Lovely New Books, in which case I can look for second-hand books on-line as well. Watch this space.) Just recently I have been binge-reading Rom-Coms by Tricia Astley - recently? This started in the run up to Christmas, and now it is February. 'Download this book for 99p', it says, and so I click. It is still massively cheaper than going out for coffee and a cake a couple of times a week.
I have some activities lined up for the Observing of Lent, but we've still got a week to go. Let's not post everything on one day!
Finally; Ang has already blogged about the stitchery swap project that we have started - as she said, it is slightly scary! Embroidery is a new skill for this year for me. I have been making my eyes water stitching her address; I started with the last word so that by the tie I got to her name I might have improved slightly. At the rate of one word per day, I will have finished tomorrow.

Oh me oh my, there's more to this backstitch than I ever thought possible! It is a bit of bravery and trust. Although we've been reading each other's blogs for several years, but have never spoken to each other or met up - yet!
As a respite from trying to be super-precise, I am doing an experimental free-hand sample, taking the needle for a walk. I did draw the outline a few times first with my vanishing purple pen, but the purple didn't really show and soon vanished so I just went ahead anyway. It is still a work-in-progress. 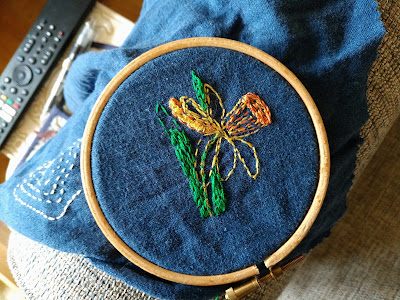 I'm feeling a bit chuffed though; it looks so much better in the picture than in real life! I have taken against satin stitch - too much like hard work - in a sort of ragged infilling looks much better. 'Rustic', as a friend said. It is an opportunity to try out things without minding about mistakes. I shall just leave the mistakes there as part of a 'how to (not) do it' reminder.