We've spent this afternoon 'wind-proofing' the garden; himself went out for a walk in the afternoon and found himself being gusted along by the wind. I don't know how that has affected his walking speed and distance; I suspect the going with the wind and against the wind may have evened themselves out.

I chased after the empty buckets roistering down the path and shut them into the shed, we've got the lid of the cold frame fastened tight, and have been out once again already to sort a wheelie bin that has got a bit over excited.

Now dusk is falling, and great grey-pink clouds are racing across from north to south. We shall see what tomorrow brings.

I've spent most of yesterday and today sewing for the postcard project. Today I finished the stamp and stuck stitched it to the card, and this afternoon decided to add another small item. Pictures to follow after I'm sure that Ang has received it. That won't be very soon, as it needs to be packed up and posted first!

My orchids have all come into flower again, in spite of my very inexpert care. I'm fairly sure they should be re-potted and given orchid feed, but so far they have received nothing more than neglect and occasional watering. 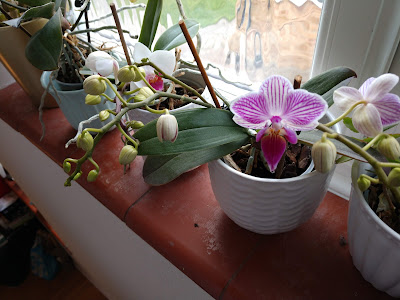 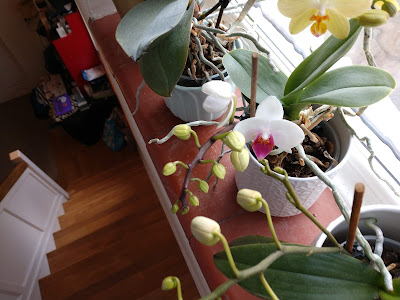 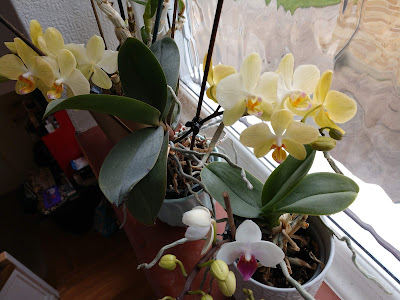 The pink and white orchids originally belonged to my godmother. She never really liked being given cut flowers 'they belong in the garden' or house plants 'I always kill them', but the orchids were a great success. Once we convinced her not to water them during the week, but to wait until we came at the weekend, they seemed to thrive. When the first one stopped flowering I took it home and replaced it with another, both bought from M and S. I think they brought her a lot of pleasure.

The yellow one came from a piano student. The first year it was very pale, almost greenish, but has transformed since then into this golden beauty.

They are all on the windowsill at the top of the stairs, so I see them every morning. I'm pleased to see there are so many buds still to open. 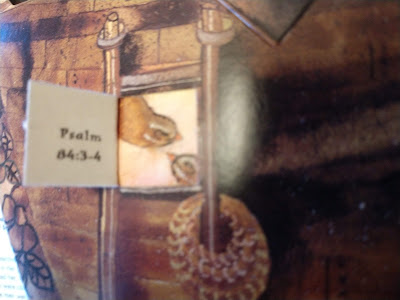 Psalm 84 3 "Even the sparrow finds a home, and the swallow a nest for herself, where she may lay her young, at your altars, O Lord of hosts.
Today - The Lion of Judah
"Do not weep. See the Lion of the tribe of Judah, the Root of David, has conquered. 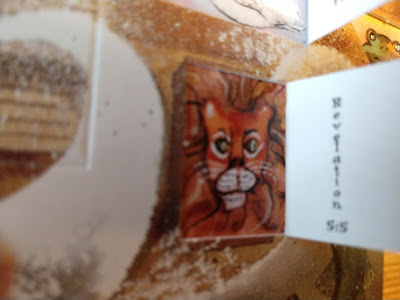 Yesterday; all about gentleness and care and safety, today, about strength and power.