The worst has happened - we have run out of ordinary, 'brown' tea!

I like to go out into the garden in the morning with a mug of English Breakfast tea and see what is going on. 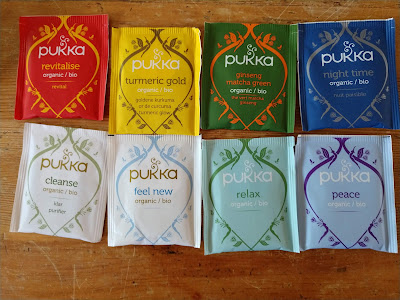 but no English Breakfast Tea. At least, not until tomorrow, when normal tea drinking can be resumed.

I did discover an ancient packet of Darjeeling in a dark corner, marked 'best before October 2020'. It was certainly a long way past its best and was promptly tipped into the compost bin.

The compost bin that I bought maybe 25 years ago has been worth every penny that it cost. It contents have survived a smouldering fire, (too many grass clippings) and drowning, (too many rotten potatoes from a sackful that went off faster than we could eat them) and now I am hoping it will survive relocation.

It is a green johanna, (now faded to grey with age) designed to operate in a shady spot, and since the shed was dismantled six years ago it receives full sun for half the day. Quite often we find all the worms have climbed to the top, waiting for an opportunity to escape the heat it generates. It has coped with everything we put into it including bones, meat and fish scraps, egg shells as well as the usual vegetable waste. I've even used it as a sort of shredding machine, tearing up papers into strips and stirring them in. Everthing, that is, except apple stickers, peach stones and tea leaves. And we do get tomatoes growing in surprising places in the garden after using the compost. 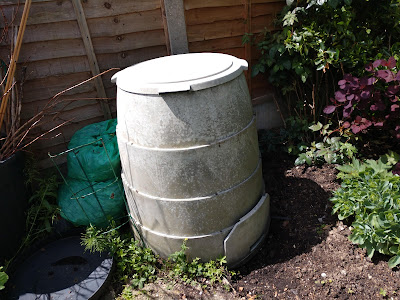 The plan is to empty it and move it to a place in the shade of the new shed. So far we have he has dug out about 50 litres of beautiful compost from the base, leaving it more than half empty. The last, and smellier, contents will need excavation, and then I'm hoping we can roll it to its new position.

I'm very anxious that Johanna should survive the move, as the same bin costs about £130 nowadays!

I know there are others, which are cheaper, but the dear old Johanna has proved to be predator proof - living near open ground and a stream there are plenty of opportunist foxes and rats about.

The vegetable patch is looking wonderful; those are potatoes sacks in a row at the front, spaghetti marrows and tiny kale plants in the middle row and then lettuces, broad beans and Brussel sprouts in the third row. I spend a lot of time here, just looking and watching. 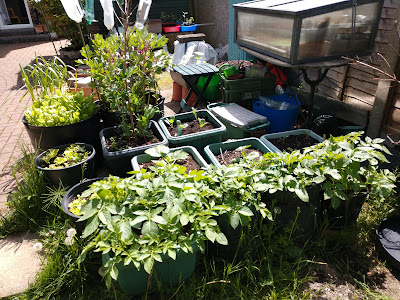 Then there is the garlic, with tiny little radishes just coming through, and behind that the tomato plants. Today I discovered a couple of sunflowers left over from last year making their way up through the forest of broad beans. 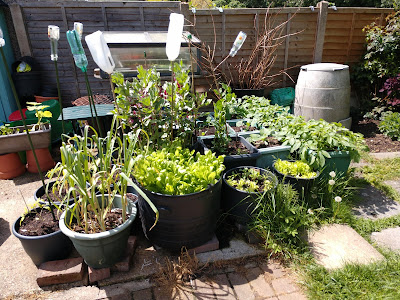 The plastic bottles make good cane toppers and bird scarers.
This part of the garden is still a work in progress. The three wooden barrels, from left to right are sweet peas and sunflowers, poppies, and herbs. I've also got courgettes and dwarf beans behind; the plan is to train the courgettes up canes like vines, to keep the courgettes off the soil and away from pests, and for space-saving, and because it might look pretty as well. 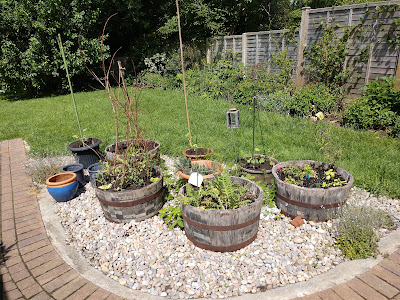 But I've no idea where to put the pumpkin!