Every so often, about once in two years, I get distracted when sorting out 'morning pills' and 'evening pills'. If I'm lucky (!) all that happens is that I miss a complete set. But just occasionally, I take the wrong set. Like on Monday night. I woke up at about 2am thinking 'there was one of those shiny blue capsules in that handful I took at bedtime, which means I used the 'morning box' instead of the 'evening box'. So I spent the rest of the night waking up from time to time and trying to work out if that is what happened, and what to do about it... if I had actually taken the wrong ones...

The worst consequence was only a disturbed night's sleep - I came to the conclusion that as long as I didn't take the morning pills AGAIN, everything would probably be fine. And it was.

But Tuesday was another disturbed night - too hot.

I find that a couple of 'non-sleeping nights' can really slow me down the next day. It would have been okay, but several piano pupils have changed their lesson times this week and that always throws me as well.

Sitting and knitting might have been restful, but I had ripped out the Adult Surprise Jacket I had started, as I was feeling very doubtful about the measurements I had concocted. I went on the Schoolhouse Press website and bought the digital pattern, downloaded it, read through, recalculated and cast on again. I was right in that my previous attempt was wrong.

In my befuddled state it took several attempts to write up the figures for the size I am making, cast on 268 stitches and mark the decrease points, and then get the first couple of rows done but eventually (several hours later!) all was well. 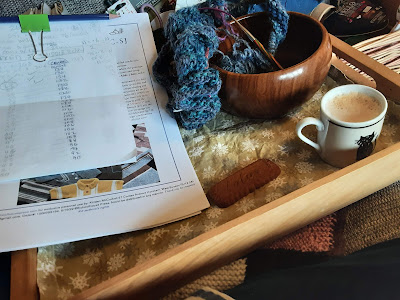 Do you know about knitting bowls? 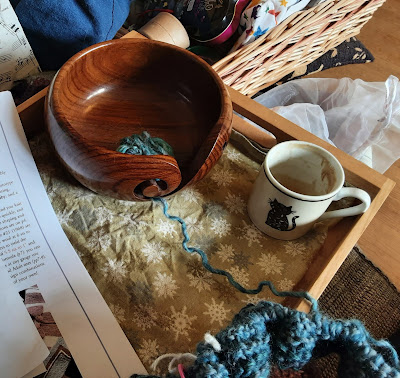 It is a wonderful accessory. The surface is highly polished, and the rim curves inwards just a little, enough to persuade the ball of wool to stay inside. The curly whirly slit comes into its own when the ball becomes too light to stay inside of its own accord. I used a small wooden bowl until I was given the real article as a birthday present. The bowl was OK, but nowhere near as good as the real thing.
I have been going through the bookshelves and CD stacks and music (piano music) piles to see if I can sell them to ziffit.com. The reject pile was twice the size of the accept pile, but I still had enough books to be able to arrange collection by courier. Here's hoping they will still be happy to accept them once they have seen them. Meanwhile that's about two feet of bookshelf space cleared.
I'll try the rejects again when we go through the next set of shelves. Maybe they will take them then. Otherwise - there's a fete happening soon on our local common and a flyer came through the door for contributions for the bookstall. They are about to get lucky! Or unlucky...
We have been sleeping much better since we changed the duvet from the all-season one to the summer one on Wednesday night - even Wednesday's thunderstorms didn't keep us awake. Hopefully a couple of night's sleep will clear the brain fog...