Thursday 23rd June - In and out of the Garden

Mostly IN the garden, these last few days.

It would be more sensible to do the pottering in the morning, or the evening, but I have been foolishly doing it in the afternoon. Because - I don't know why because. Things don't always have reasons, or of they do, it might take a while for the reason to become apparent.

I have at last done something with the few remaining cuttings of rosemary and lavender I took last year. I gave several away, and killed some of the others through neglect, but have put the three lavenders and two rosemarys - or was it the other way round? - into posts and now sent them to their probably deaths outside the front door. The front of the house gets full sun all morning and early afternoon, and if we forget to water them, then that's that. We are not very good at remembering... rosemary for remembrance...

I nearly killed myself - figuratively speaking, but it felt like the end was near at the time - emptying a pot of potatoes. The foliage was looking unwell, so I followed the instructions for blight, which are to harvest and save what you can, chuck out the leaves (not into your compost) and see what you get. 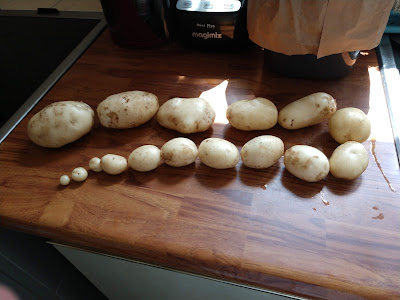 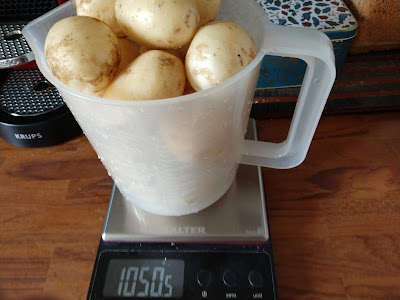 I did throw out several small potatoes - a couple went 'squish' and a few more had soft black squidgy spots. I was grateful for my gloves! There are three more pots - one is looking a bit blighted so I will get onto that tomorrow.

These are from last week, but I don't post them until I have finished both pages.

On Wednesday I entered a shop - pause for a fanfare of some kind - and caught sight of myself in a mirror all masked and behatted and bespectacled. Oh my word - I looked exactly like some mad old serial killer. The lenses make my eyes SO big!

We have invested in a microwave rice cooker and I have been experimenting with rice pudding in it. I prefer it WITHOUT the skin, which means simmering it on the hob and stirring to stop it burning, or microwaving and clearing up the mess when it has boiled over and climbed out of the bowl. This contraption looks promising. 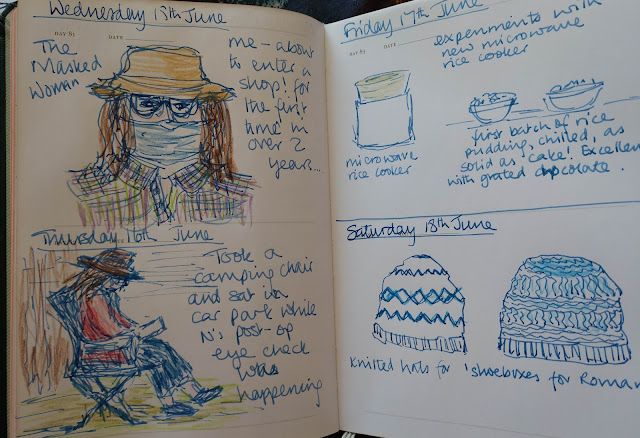 We are back to sitting under the apple tree again, dark and shady and, most importantly - COOL.
Once of the cats sleeps in this chair in the dining room, and there is great distress if we fail to half close the curtain in the afternoon, as she is then in full sun and has to vacate this preferred spot. 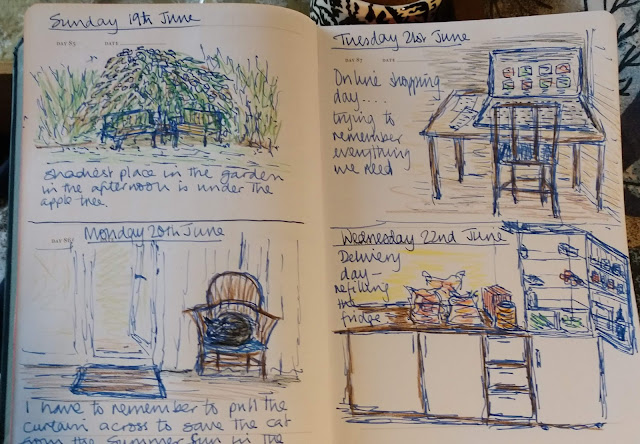 On Tuesday we both placed a grocery order; he is carrying on with the main shopping, and I do a smaller one for things I want or need. We are trying a system where I cook lunch. our main meal, on Friday, Saturday and Monday as this fits in with the rest of my schedule. It is slightly easier if I think about what I want separately to the main order. This week I shall be cooking chicken katsu curry (wagamama spices kit), meatballs, with extra going into the freezer, and something else which I have made a note in my plans of but can't remember at the moment.
We do have to coordinate our orders to some degree, to avoid overflowing fridge or freezer! His order arrived, as usual, at 7 am on Wednesday (I am still asleep at that hour!) and mine came later at 9.30 - a more civilised hour of the day!
Ruby Tandoh contributed this to the Ocado magazine back in January; I made it last week, using half quantities and one stock-pot sized tub of Red Dragon Thai Curry Paste. It was definitely chilli hot, but not too much for us.
I will wilt the spinach in the microwave next time, and then I will be able to do the whole thing in the air fryer. This time, the unwilted spinach made a huge heap on top of the other ingredients and would have caused havoc - smoke, fumes and whatnot - from touching the heating elements so I transferred it to the ordinary oven. Live and learn, live and learn... 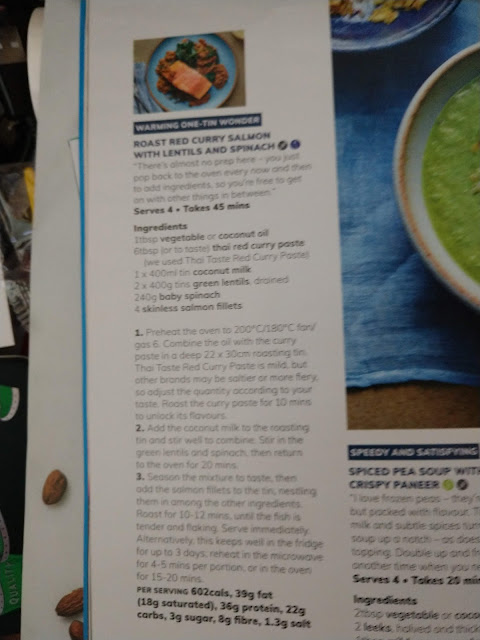