Saturday 23rd July - many a slip and all that 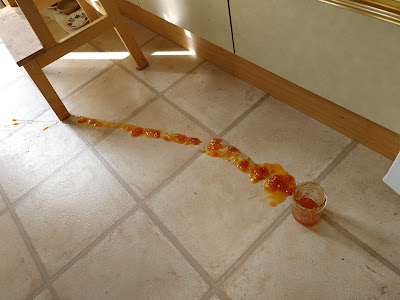 If I'd have taken this photograph a few seconds later, I could have included a bemused cat.

And then another photograph of the cat having decided that it was safe to walk on.

And then the cat not liking the warm sticky sensation on her paws, and being held upside down while I wiped all her paws before she could go any further.

However I can confirm that no people or animals were hurt when this happened, and that the microwave recipe I used for the gooseberry jam works very well for apricot jam. 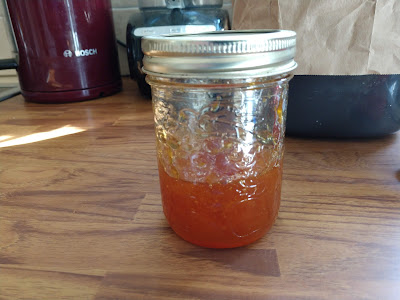 I managed to save half a jar.

In other news - is it news - just the ordinary day-to-day goings on in an maybe not quite ordinary household; my third tub of potatoes yielded 750gm, and I had some of them washed, boiled, buttered and on the plate a scant half hour after excavating them from the tub where I had been growing them. 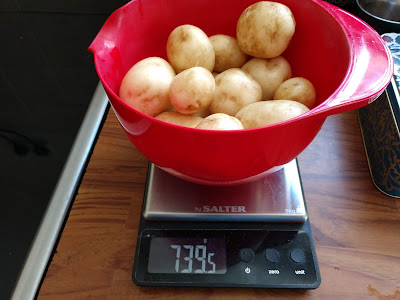 They were delicious. I was 'cooking', if you can call it that; ham, new potatoes, coleslaw and a three bean salad. The salads came from M and S. (I did make yesterday's salads; tomatoes thinly sliced with finely chopped spring onions and vinaigrette dressing, and cooked and cooled french beans in a lime and ginger dressing).
Posted by KirstenM at 20:01:00