A kind friend gave me 250g of gooseberries from her garden. Well, it was slightly less than that by the time I had 'tested' a couple. They were sweet/tart, juicy, and a beautiful red.

I'm the only one who eats gooseberries, soit was entirely up to me what happened next; 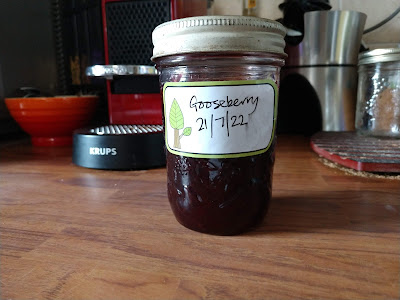 It was a very quick make in the microwave. I found a recipe for jam using any fruit;

Juice the lemon, and cook the fruit with the juice and the lemon halves for 6 minutes on full power, stirring occasionally.

Remove the lemon halves and add the sugar, stir until dissolved, and cook for a further 20 minutes on full power or until setting point is reached.

Notes; I halved the quantities and made this in a 2 pint Pyrex mixing bowl. I didn't trust any of the plastic microwave bowls to cope with the temperatures.

Full power on my microwave is 1000W which has everything bubbling furiously. I found that half power once the jam and sugar had begun to boil was ample.

I cooked the fruit and lemon juice for a couple of minutes less than 6 minutes.

20 minutes was too long - I reckon it must have reached setting point after about 15 minutes. I've ended up with a firmer set than I was expecting. This could be because I was using half quantities.

The rain on Tuesday evening was very welcome; one of my 'piano families' had dropped by with a bottle of wine - how very lovely! - and we were in the garden at the time. I don't have any covered area, but it was so warm we were just standing in the rain. I commented  on how the children in Indonesia would all be playing in the street when it rained, as we played in the snow. She told me how they all used to rush out to play 'in the first rains' when she was little.

Yesterday - Wednesday - we were back at Standen, the National Trust House I visited a number of times last month. I toiled up a grassy path - toiling not for heat, but for steepness - so that we could walk along the path to a sort of belevedere. The views were well worth the effort. One of the glorious things about going out is having a long distance to look at, rather than just the garden behind our house, or the bungalows opposite, or a book, or a screen. 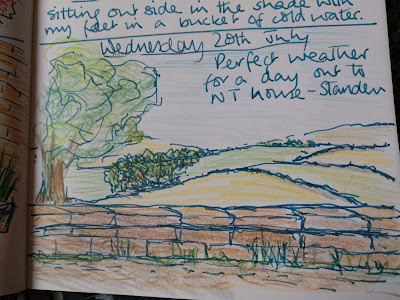 Tuesday was Too Hot. I spent the morning sitting in the shade with my feet in a bucket of water. The cats just shuffled around from one patch of shade to another. 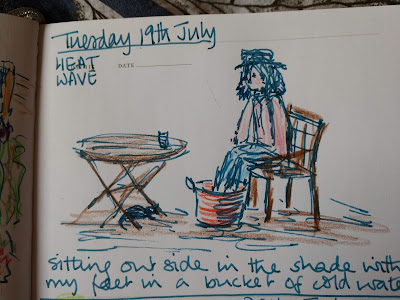 Monday was spent following the sun round the house, opening or closing windows and curtains depending on whether they were in sun or shade. 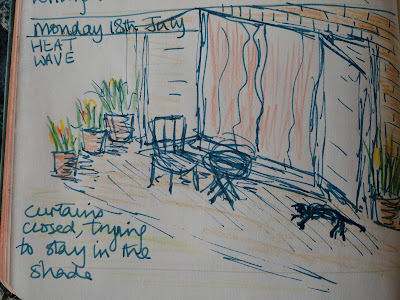 Sunday - this was the last day we used the hose. The water pressure is quite low, and it is better, and more economical, to use buckets and watering cans. 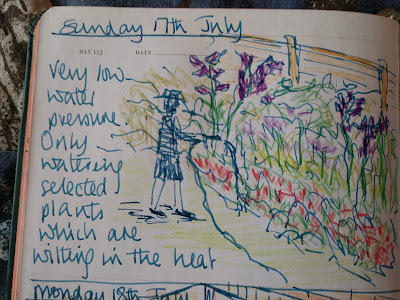