Well, that was a pleasant surprise - studying a Schubert Impromptu (Aflat, op 109);

and then teaching it added an impressive 600 steps to my daily count. I have set a very modest target of a mere 1750 steps, partly because I am so lazy, and partly because I like to succeed and get the little 'flying feet' cartoon when I reach my target, but on a 'slow' day I wasn't even reaching that. So piano practise has suddenly become a more welcome activity. As I am only at 400 steps (just after lunchtime) I think I will sit down at the piano and do some more work after I have finished this blog post (typing does not affect my step count, I find).

The consultant said he would like me to reach 10,000 steps a day; I gave him a hard stare and he suggested maybe 5000 to start with. That's over 2 miles, which would take me heading for 3 hours to do in one go. Some days I walk so slowly that I am in danger of falling over, especially if I'm on a footpath rather than a pavement!

Of course, playing the piano should be a pleasure - and I am coming back to that mindset after years of doing so much teaching that the last thing I wanted to do to relax was play some more. I have just a scant dozen pupils now; two or three in a day, several days a week, instead of maybe as many as 60 per week at one point, plus some class teaching as well. How did I do it?

Piano playing will be even more of a pleasure in ten day's time when the piano tuner has worked his magic. I am lucky in that my piano has always kept in tune in spite of a seemingly endless procession of students. But it has recently become well beyond bearing - after nearly three years, it has to be said. I don't think Mr L has visited since 2019. 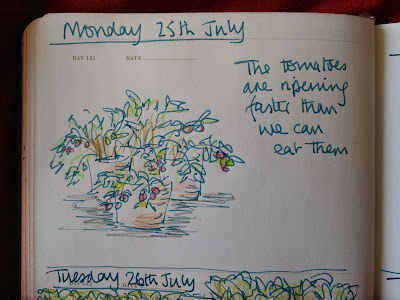 Tuesday - I was sitting in the car park waiting for Himself to be signed off after his cataract ops last month. We went together in case I had to drive him back, but in the event they did not need to put those drops into his eyes, and he appeared looking extremely happy with the outcome. Meanwhile I enjoyed the view; wild flowers, butterflies, and then, joy of joys, a steam train! I missed it when it was 'going there', and moved my chair to the top of the embankment as I reckoned it would be coming 'back again' fairly soon.
I really enjoyed listening to the engine - the simple chuffer chuffer pattern becoming infilled with more complex sound patterns as the train drew near, which faded as it continued out of sight.
The Gershwin Rhapsody takes some of its rhythms from steam trains.  I also read somewhere that he hadn't quite finished composing the piano part so improvised a chunk of it during the premiere. Have a listen - this is Leonard Bernstein performing and conducting (only 17 mins long). It is also worth reading the comments.
Also,
I see I miss remembered the lyrics, after all these years... 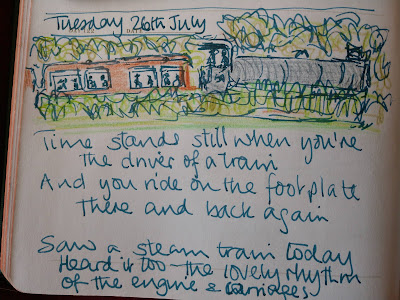 Well, you must know all about the pointy ends on my tomatoes by now. I nipped the ends off and roasted them with a little olive oil to accompany out breaded sole at lunch time. I can see there are another bowlful ready to pick - I'm glad I only have four small plants! 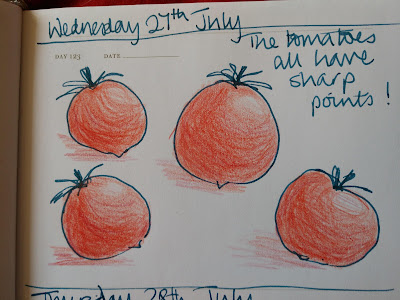 Yesterday, Thursday, Himself put in an energetic hour collecting up all the fallen apples and other debris from under the apple tree. 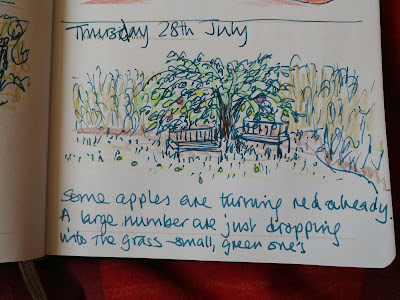 Time has flown by, and I must get on and do something useful now!