So I've increased my daily step count challenge to 2000, which might not be much, but is still better than before. I've found that pottering about in our kitchen, even though it is quite small, is enough to boost my count by several hundred steps, and that's even before I make a start on some energetic piano playing.

I discovered that we had 6 pints of milk, in 2 pint cartons, stacked up behind the one that's currently in use, and more will be delivered on Wednesday. Time for action.

This site for allotment gardeners has a very simple recipe, in fact I might have tried it before...

Take 2 pints of ordinary milk (mine is semiskimmed) and heat until very hot but not boiling in a stainless steel saucepan as opposed to aluminium. Stir every so often, presumably to stop it sticking.

I waited until the milk changed and began to smell like hot milk for making hot chocolate or putting in my coffee.

Remove from heat and let it cool for a few moments.

Add two tablespoons of lemon juice (that turned out to be half a lemon) or white vinegar and stir.

The curds will separate from the whey. Stir and allow to cool some more before straining the mixture through a fine sieve. The cheese will be quite firm in texture.

That's it. Except it wasn't; but there are further instructions; if the milk doesn't separate out, add a little more vinegar or lemon juice. I'd used up the lemon, so added about a teaspoon of white wine vinegar. Wow, that was a bit instant! What an 'orrible looking sight! 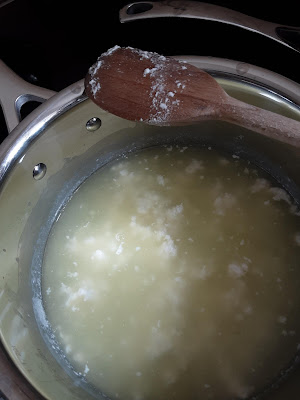 So now I have 150g of home-made cheese, which currently tastes of nothing at all (salt, pepper and herbs should fix that), 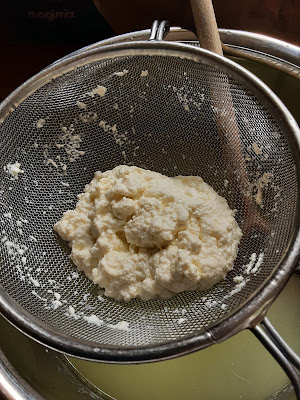 and about one and a half pints of whey. 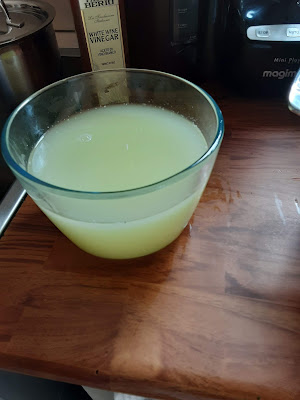 I have never tried whey on its own, and I don't think I am going to. Apparently it be used up in bread making, or scones, so I have made a batch of bread/butter/sugar mix, as I used to do in years gone by, so that I can make a couple of scones at a time in the Air Fryer. Like right now - I feel a 'scones and tea moment' coming on.