There's been a bit of a gap - and I find once a gap in something has happened it gets increasingly hard to restart.

What have I been doing for a week and a half?

The simplest way to try and recall everything is maybe to post all the pictures I have taken since the last post on 18th August;

Which I have just done, and then deleted anything which was in the nature of a reminder to myself about something or other, or relating to a piano lesson...

Ah, here we go, this was the Johanna Basford picture for week ending Sunday 21st August. I'm pleased with how it came out, but I still hadn't decided what to put in the diary spaces on the facing page. I have a diary on my computer, linked to the phone, and a paper journal-cum-diary, and also a page-a-day diary I write up in the evening. 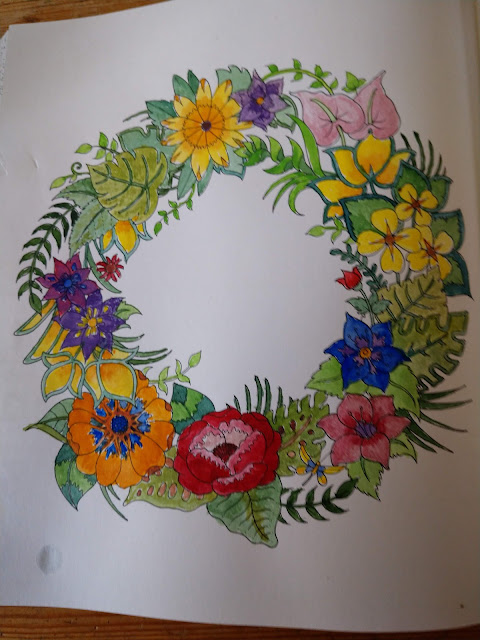 Scibbly sketches; - one of the folksongs set by Benjamin Britten is 'Oliver Cromwell is buried and dead - hee, haw, buried and dead'. I've always loved this song, and the setting. 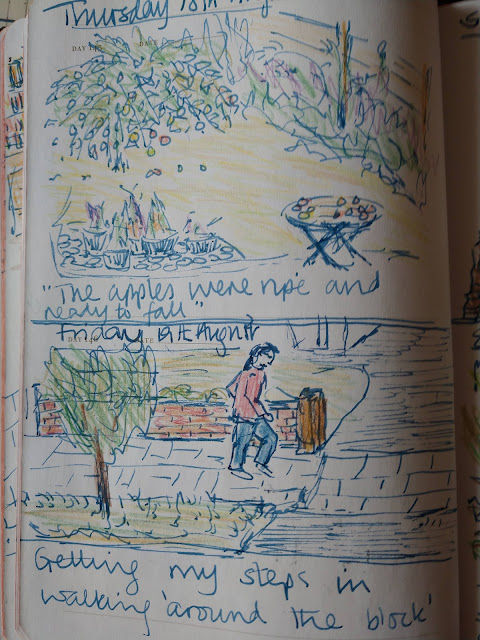 How Peter Pears can get the words out so quickly and clearly is a marvel.
We have developed a terrible mini-magnum habit. "Just the one," as Mrs Wembley always said in the sit com "On the up". I can barely remember anything about it except Joan Sims as the cook, Mrs Wembley. 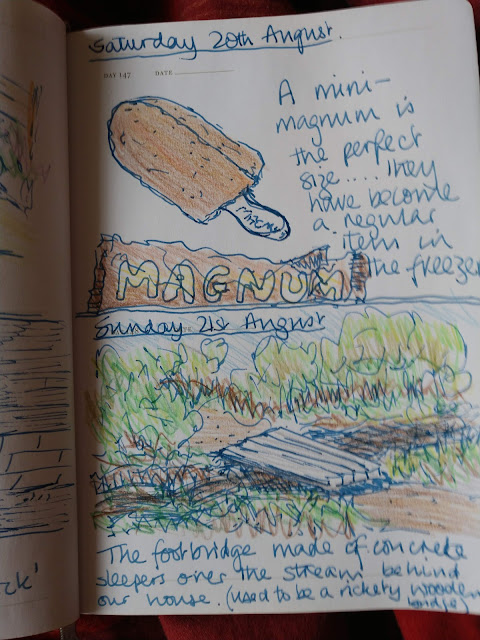 There have been quite a few takers for the apples I have left out at the gate. 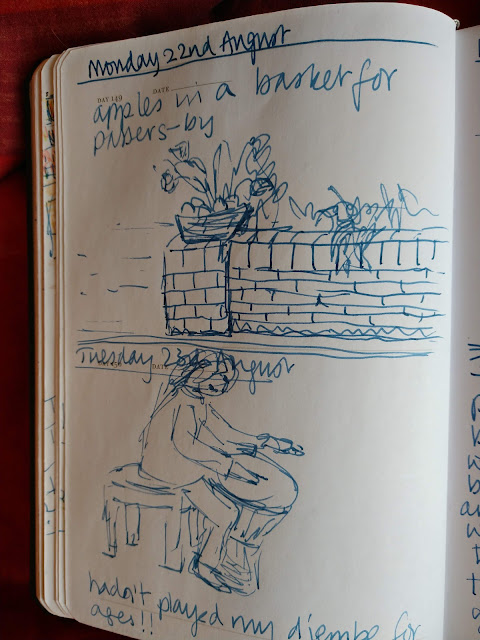 and there is a slight possibility of someone wanting djembe lessons, or wanting to be in a djembe group. There are significant problems in running a drumming group over zoom, namely the time lag between the different people on the zoom! I suspect that drumming in the garden would have to be severely limited too, for the sake of the neighbours.
Wednesday morning is always and event - our on-line grocery order arrives - what shall we actually get this week? We usually accept the substitutions unless they are truly bizarre. This tie a pizza was squashed, and we got to keep the pizza AND received a refund. There was always the memorable time our curry meal with rice for 2 turned out to be two packets of rice and no meat... 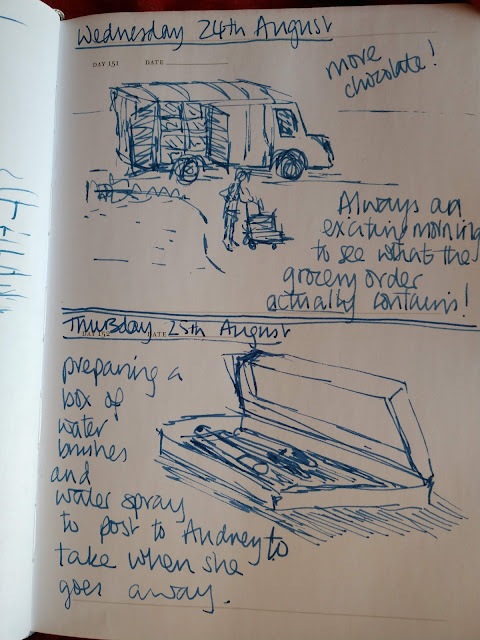 I packaged up a couple of water brushes (where you fill the handle of the brush with water) for a friend to try, but she had gone ahead and bought them. Just as well, with the postal disruptions. They are so convenient.
My side of the dining room table; 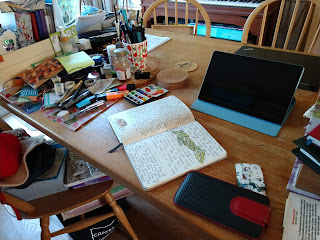 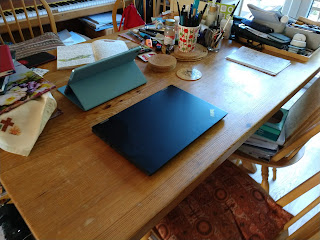 This is something called Plum Shrub. he jar is two-thirds filled with halved and stoned plums (you add the stones as well), then one third filled with sugar, the zest of a lemon also goes in (I now have an odd-looking bald lemon in the fridge...) and then you fill to the brim with rum. Seal tightly - I've added tape as the lids leaked - and keep in a cool dark place until Christmas if you started it in August. Then you can strain and use the liquid as a mixer or a liqueur to drink, and eat the plums.
I have never made this before, so you can follow this recipe at your own risk. It comes from 'It's Raining Plums' - a collection of recipes from the Daily Telegraph, edited by Xanthe Clay. One of the cookery books I saved from my mother's hoard. 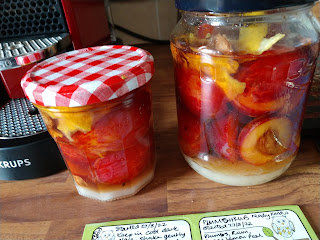 Perennial Kale. I might give this a go. The suppliers look most interesting and I shall have a browse around their website. 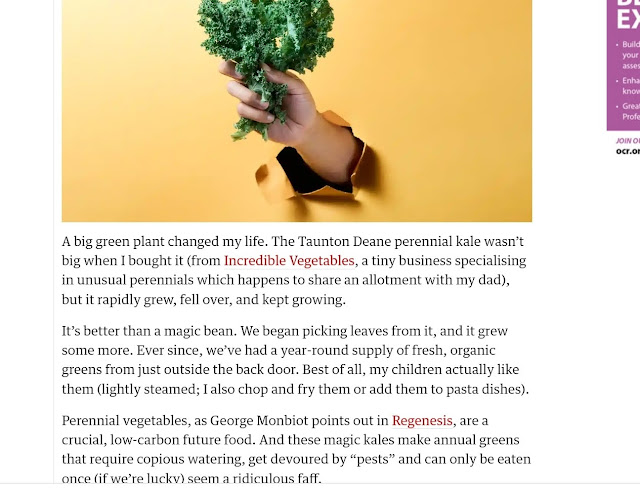 I've posted these pictures of seed packets here as I got sick of having them hanging over my guilty conscience. So the other day I emptied the contents over a couple of bare patches in various flower beds and will just see what happens next year. I put the picture here as I didn't know where else to put them, and the last thing I wanted was to have Empty seed packets cluttering up my life! 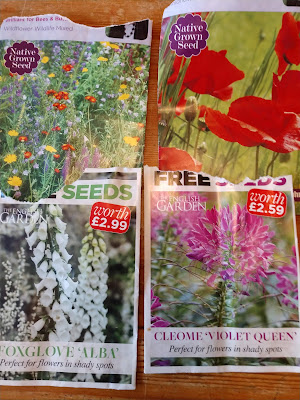 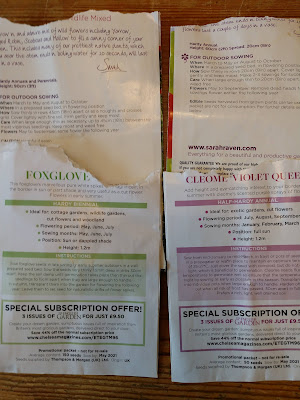 I reckon that's more than enough for now - we are up to Saturday 27th August. I must reassure Ang that I have started on the stitching for August (better late than never?) and will hurry it along... 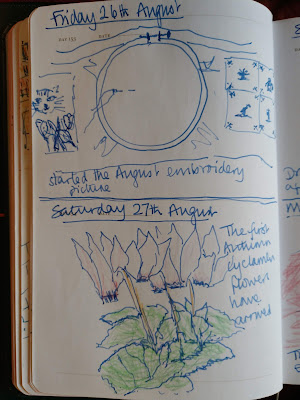