Monday 12th September - where have I been?

I've been nowhere, but September has slithered through my grasp. The longer I leave something, the harder I find it to get going again. And then the grumpier I get while I am in that waiting period between wishing I was getting something done, and the actual getting that something done. Someone like Joan Didion (but it might not have been her) said 'The enemy of apathy is action' and she's (for it was a woman who said that) is not wrong.

Today I have been 'Action Woman' - it is only just gone 10 am and I have changed the pillowcases, cleaned the bathroom, done the ballet exercises, had a 'doorstep meeting' with a friend from church to talk about the upcoming Harvest Supper, made and drunk a 'second coffee' and am now clearing the next of the items on my list - writing a blog.

The Queen - everyone needs to acknowledge the Queen, not to do so would seem wrong. She was, and is, a remarkable woman, of great insight, honesty, integrity, intelligence, and makes most of the current public figures look at best light-weight and and worst just plain tawdry.

However we were rather unaware of the Royal events of last Thursday, as my father lost his balance while changing the printer ink in his printer, gashed his head on a wardrobe and bled profusely onto his study carpet. The first I heard of it was a phone call from him (halfway through a piano lesson I was teaching) shortly after 4pm saying he was fine, the carers had got him onto his bed and called an ambulance, and could I ask his cleaner to come round and get the blood out of the carpet.

To cut a longer story shorter, we shot straight round to his flat. After three hours the ambulance arrived, and took him off to the local (!) hospital 20 miles away. He was scanned, sewn back together with 13 stitches and sent home the next morning, and is now back to his normal self. But it is not surprising that the Queen took second place in our thoughts that day.

What of the previous 8 days? Ah indeed. Luckily I have my sketch-a-day reminders and photographs on my phone or I would never be able to remember.

Ang's embroidery postcard arrived on the 2nd. She sent me a card of Dorset Buttons, made by her own hands, including matching thread for when I find something suitable to sew them to. The bicycle is her picture for August, using two more Dorset buttons - so ingenious - for wheels. We have agreed to add a note about the Queen to the September embroideries. 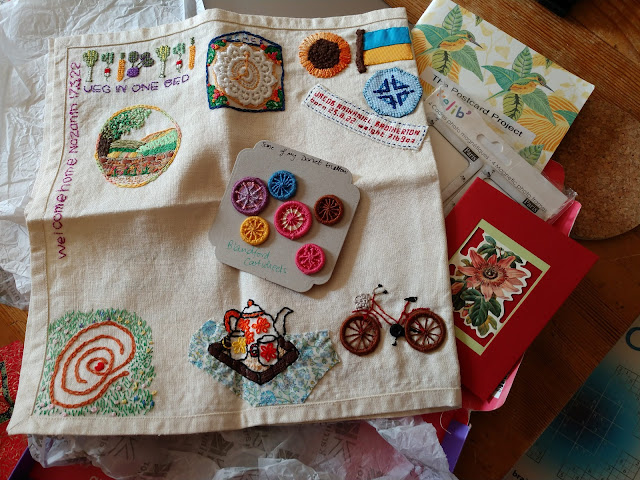 I'm still busy working on the August one - about three or four weeks slipped by with me gradually having less and less energy. It came to a head on The Thursday, when I was so breathless that the paramedics seemed as concerned about me as they were for my father. We've tracked this back to reducing my steroids throughout July and August, as requested by the clinic, down from 7.5mg daily to 5mg. I was able to talk to a nurse who recommended increasing them, and already I feel better. But this explains why I was getting less and less done.

Ah yes, raking up leaves and acorns, both still green, but falling steadily. Sunday was a thunderstorm which woke me with a start. We have stopped collecting grey water for the garden, as we were collecting about a bucketful of water every night and not watering the garden with it!

I had a fine time on Wednesday 7th making blackberry cough syrup from the punnet of blackberries a friend brought round. It is absolutely delicious, and I can't wait to get a cough in order to have an excuse to indulge. Well, maybe not. Perhaps, at the merest suggestion of a tickle I should take a couple of teaspoons just in case? I made two small bottles, so I could share one with the friend. 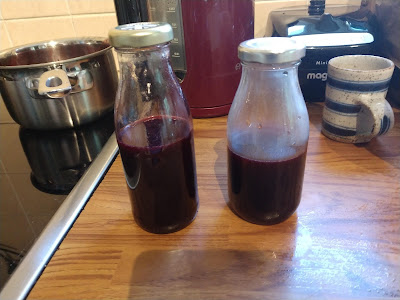 Gosh! Was blackberry cough syrup-making only last Wednesday? It seems to me that is was a lifetime ago. Time seems to contract and expand in the most extraordinary fashion.

The jasmine is looking very sorry for itself having been untangled tied to the fence. Vicky almost disappeared at one point, trying to bring order to the rose that has had life all its own way for decades now. At the moment that corner of the garden looks all disheveled and unhappy, but I expect it will recover quite quickly in this lovely Autumn weather - damp, sunny, warm - perfect for weeds and plants alike! 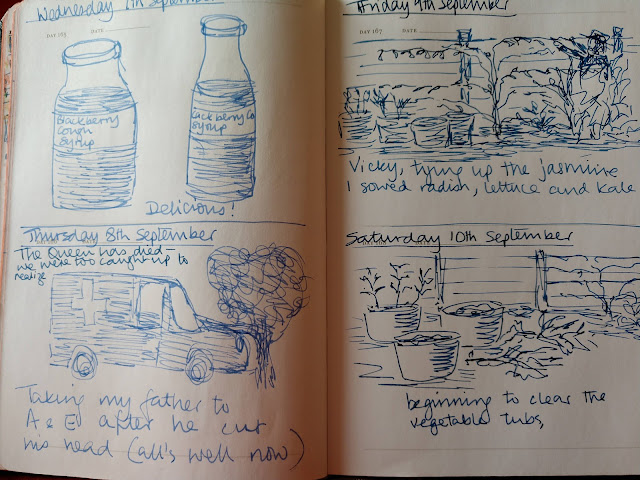