I have started the week in the way I probably won't manage to continue. One doesn't like to become predictable, after all.

We've got into the habit of 'Second Breakfasts' - a slice of toast or a couple of mini-croissants or  biscotti if there are any left in the tin.

Today I surprised Himself  with a second breakfast of a poached egg on toast. It was about the same amount of effort as making a couple of slices of toast and marmalade. 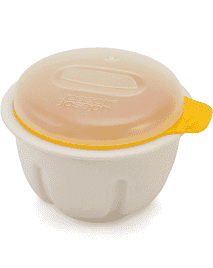 Step two. Put a slice of toast in the toaster

Step three. Add water to the egg poaching thingy up to the line, put in microwave to heat for 60 seconds

Step seven. Serve up perfectly poached egg to delighted husband. He needs the calories as he uses them up getting his daily steps and doing this and that around the house all day.

Here's the second surprise (which I haven't mentioned to him yet, after all, I didn't want to spoil his egg.

Step eight. Clean up the microwave after the lid popped off the every-so-nifty-thingy just before then end of the 50 seconds, so that the entire interior of the microwave was sprayed with little fragments of cooked egg white and steam.

I cunningly served the egg upside down on the toast, so the explosion site was hidden - it looked great as I bore the plate to the table!

And as the microwave was still all steamed up inside it was quite quick and easy to clean, while the toast for toast-and-marmalade to go with the coffee was in the toaster.

I still think this is the easiest method so far - in olden days I've done the dropping an egg into a pan of simmering water, suspending a sort of ladle in said pan of boiling water, tried paper pouches (messy) and other microwave egg poaching devices but I prefer this one... I reckon I'll go for 40 seconds next time and let it stand for 10 seconds... I'll let you know how I get on!

All very eggcellent, if a little too eggciting...