Oh, and, of course, the real postcard;

There were two pieces of stitching for us; one to mark the the death of Queen Elizabeth in September (how low ago that seems now) 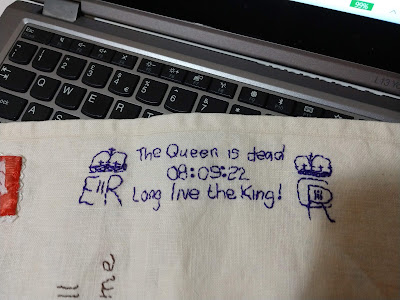 and the regular picture for the month. Ang has knitted a little flag - in lovely Autumnal colours too. It has cocktail stick 'needles' to hold the the stitches. Brilliant. 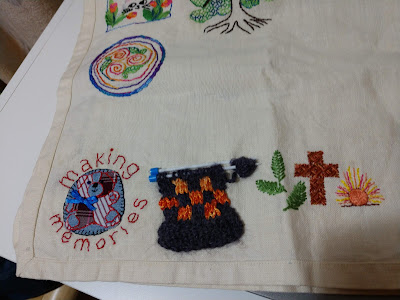 I have just heard that the Royal Mail Union has called off the strikes planned for the beginning of November, for which I am very grateful as I have spent today finishing my own picture and will be able to post to tomorrow, so at least it will be in the post box before the end of the month. Just.

My sewing box looks like this at the moment, as I have been choosing threads, sewing with them, tossing the unused length back in the bx, scrabbling for the next colour and so on all day. 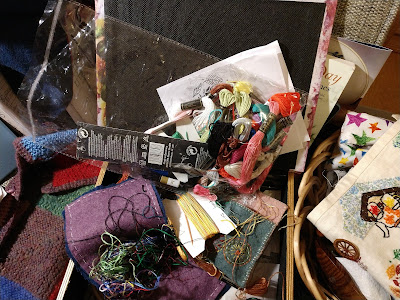 Mine is the sort of picture that has no end, so I called it a day at about 9pm. I need to iron it to lift the fixion pen markings, write up the note book, collect up the 'flat present' and wrap everything for the post. Oh, and this time, remember to take a picture first!

I won't post pictures of what I did until it has had a chance to reach Ang.

This was my previous effort, which I forgot to photograph before I sent it off; I tried to use 'blackwork' patterns to fill in the green leafy bits of the tree; harder than I thought. I am definitely going to think up something easier for this month. (hollow laugh) 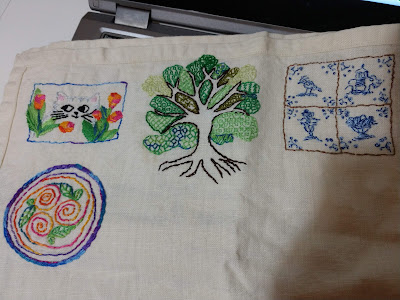 This project is nearing the end; just November and December. It has been a lot of fun; I had no idea what we were letting ourselves in for. Whatever will I do with myself next year?