The challenge was to complete a subset of the 'Plan of Attack' by lunchtime which was going to be at 12 noon today.

I have sort of succeeded; it is a quarter past one and lunch is being prepared as I type (it will now be served nearer 2pm!)

So what happened? Three things in swift succession...

I noticed that the lights were flashing on the cat flap, so new batteries were required (Himself fixed that - he does the electrical stuff around here) but that entailed seizing hold of the unsuspecting sleeping cat and thrusting her through the cat flap (two-person job) to ensure it still worked.

We discovered a strange puddle of water under the kettle - investigation proved it was leaking. Himself got into the car, drove to John Lewis/Waitrose in town, masked up, and went to buy a replacement. Ah, none in stock, but one will be delivered tomorrow.

The friend who was coming round after lunch (that's why we were having it early) came at the time she said; I swapped ginger biscuits made yesterday (by Himself) for her excess Nespresso pods, and also handed over three sets of Advent Tea Lights for her to pass on to the clergy.

Now I have moved my laptop to the kitchen worktop so that I can type as my 'sit-upon' - the base of my spine - is making it abundantly clear that I need a Much Softer Cushion on my typing chair! 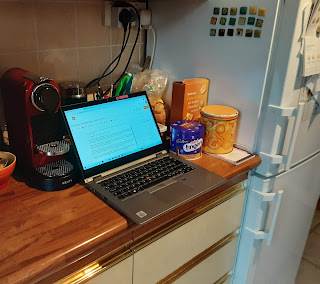 This is little more than a seat pad; 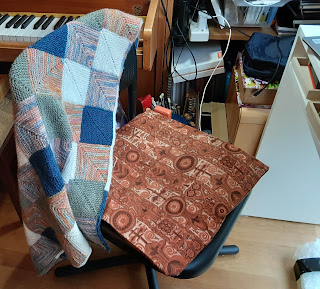 Ah, a cushion! (The little blanket is for my knees.) 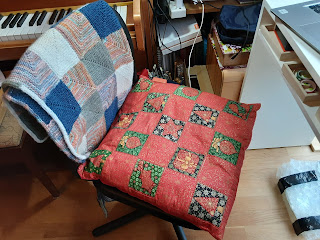 Email ThisBlogThis!Share to TwitterShare to FacebookShare to Pinterest
Labels: NaBloProMo, surprises, to do lists