Tuesday 22nd November - Once more unto the - NO! STOP!

Yesterday was an absolute whirlwind of getting things done and dealing with random and not so random events. Anyone who has played the 'Ankh Morpok' board game will know exactly what I mean

Oh No! Reading the rest of the wikipedia entry I discover that....

Discworld: Ankh-Morpork was designed by Martin Wallace and Treefrog Games.[8] It is published in North America by Mayfair Games,[1] and Treefrog claims to have sold over 50,000 copies worldwide.[9] Wallace's second Discworld-themed board game, The Witches, was released in September 2013.[9] The artwork, by Peter Dennis, Ian Mitchell, Paul Kidby, and Bernard Pearson,[4] was checked by Terry Pratchett and the Discworld Emporium to ensure that each character was faithfully represented.[9]

The game was well received, winning the 2011 UK Games Expo Best New Boardgame.[10] It has been described as an "absolute joy to play" and praised for being engaging for fans of Pratchett's Discworld and those who have no knowledge of the books.[3][10] The artwork also impressed with the cards being described as "hilarious and beautifully illustrated".[3]

On 9 June 2015, Wallace announced that the licence to produce Discworld games had been lost due to changes in the licensing scheme following Sir Terry Pratchett's death, meaning that Ankh-Morpork and The Witches were out of print permanently. He added that there was no chance that the licence would ever be renewed, or that the planned third Discworld game would be produced.[11] The game has been released with a new Victorian/Holmsian theme as Nanty Narking.

That would explain why our box is selling on-line for upwards of £100 these days, and our box of 'The Witches' is now worth £60! Well I never did! (And they are NOT for sale!) 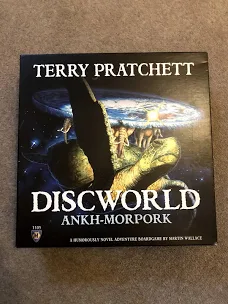 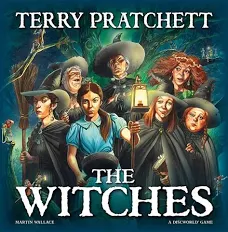 Anyway, where was I... oh yes, random events. Like the one just above. An old-fashioned example would be like drawing a Community Chest or Chance card on Monopoly every ten minutes. 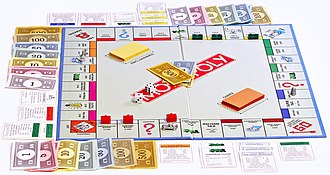 Anyway, by the end of the day I was feeling as breathless as if I had run a marathon, so today I am taking things steady. One can get into a pattern of breathing fast, even when there is no need, so spending some time being still seems like a good idea. After all, I have no more important deadlines left for today.

My 'Plan of Attack' is looking good. Just three music lesson write ups and I will be free to spend time on the notebook swap and postcard project. 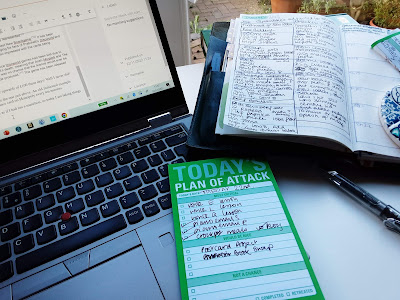 Email ThisBlogThis!Share to TwitterShare to FacebookShare to Pinterest
Labels: board games, music teaching, NaBloProMo, Terry Pratchett, to do lists