I have rashly sent off for a small slow cooker. Our large family sized one sits unused on the work top, and should be removed to someone who could use it properly.

The tipping point was when I saw a 1.8l Crockpot on the Internet for £15; is this too good to be true? I shall know when it arrives in a few days.

Our first ever slow cooker was one of the very early Crockpots, bought for us by my mother back in 1978. A great idea; except we were commuting together from York to Bradford, so out of the house from 6.00am to 7pm, so anything in the crockpot would have become soup! It came into its own at weekends.

We bought a small slow cooker when we were on holiday, back in 2010. We passed it on to my father when, after my mother had a serious stroke, he found himself having to be the cook. He never really took to it though, so we retrieved it and gave it to my daughter. She used it all the time, until the fateful night when the wall mounted kitchen cupboard became a floor standing one in the wee small hours, taking the slow cooker with it. 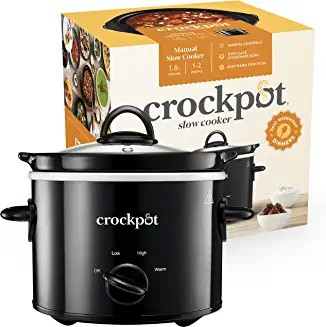 Email ThisBlogThis!Share to TwitterShare to FacebookShare to Pinterest
Labels: NaBloProMo